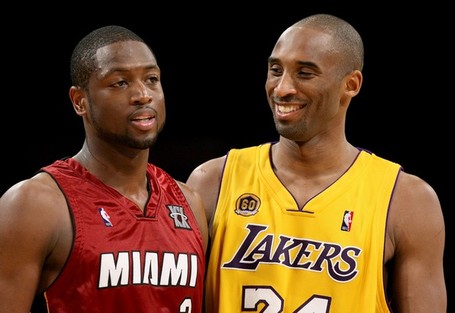 We'll lead off with Dwyane Wade because, well...do we really need a reason to start with Dwyane?  Nah, I didn't think so.  In an interview with Chicago's WMVP Radio, Wade proclaimed that Kobe Bryant is currently the best player in the NBA.  Some may think that’s a bold statement for the 27-year old to make, but I think its more just Wade being the humble guy that he is.  Here is the direct quote:

I think that this is a perfectly acceptable thing for Wade to say, especially right after Kobe won his 4th NBA title.  And keep in mind, Kobe is only 30 (He'll be 31 in August) and has a lot of great basketball left in him.  One interesting thought...what will we be saying about D-Wade in 3 years when he is 30?  The comparisons between the two could grow stronger, especially should Dwyane grab another title (or two...?) in the next few seasons.

President (and Chicago native) Barack Obama has invited Wade to visit him at the White House tomorrow.  Not only that, but Wade has agreed to help out with a daylong Fathers Day mentorship program.

After flying in from Chicago, where he is hosting a youth basketball camp, Wade will check in at the White House, and then travel to area community organizations to speak with young men from the Washington D.C. area about how they can achieve their aspirations.

From there Wade will return to the White House and participate in a town hall meeting with several other successful young fathers, including the President.  Once the meeting is over, Dwyane still isn’t done.  He will then speak about his life experiences to a group of high-school youngsters during a barbecue.  It must be an honor for Wade to be hand picked by President Obama to join him in making a difference on Fathers Day.  It's also great to hear yet another story about a Heat player doing something positive and good for others during the off-season.

During an interview on Fox Sports Radio, Chris Bosh put to bed the stories about how a 'friend' of his said that Bosh wanted to play in Miami.  What a shock...  The good thing is that it only took a couple days for Bosh to come out and refute the story.

Q. Evidently your friends are talking. The Miami Herald reported that a close friend of yours said you apparently had a mutual interest in the Miami Heat and would love to be added via trade this summer or free agency in 2010.  Is Miami a destination that you'd like to play in?

Bosh: "As of right now, I'm not sure. I like Miami, don't get me wrong. But I don't know what comes along with being a part of that organization. I don't even have any friends in Miami, which was the funniest part. A close friend of mine hit me yesterday and was like 'Hey there’s another article out' and I was like 'What now?' 'Apparently a friend in Miami said you're going to Miami.' He sent me the article and I read it, and I'm like, 'now they’re just making stuff up.' "

This was all just making something out of absolutely nothing.  None of this has changed the situation of Bosh potentially landing in South Florida sometime in the next year or so.  All this did was stir up the topic for a few days in the midst of an off-season 'pre-draft down time'.  Hey, I'm sure there were a few people out there who got all hyped up about this.... the same people who are hyped up about Brandon Marshall coming to the Dolphins.  Yeaaaa...!

The Heat invited Jack McClinton to the AAA for a pre-draft tryout on Wednesday and he did not disappoint.  During a drill against UConn G A.J. Price, McClinton hit 40-of-50 mid-range jumpers and 36-of-50 3-pointers.  And that’s NBA 3-pointers.  McClinton has now worked out for half of the NBA's 30 teams and sees himself being picked somewhere between 22 and 45.  The Heat hold the numbers 43 and 60 picks.

Something to note is that Jack was absolutely aware of who he was playing in front of (Spo, Riley, etc), but still come out and preformed like a champion.  It's great that he appreciates the position he is in, knowing that very few people get the opportunity that he is.

"I mean it's a blessing, just to be able to come in here and get invited to work out with these guys in front of Pat Riley and Erik Spoelstra," he said.

SCHOOL TO BE NAMED AFTER ZO

The Miami-Dade School Board voted on Wednesday to name a school after Alonzo Mourning and his wife Tracy.  Their charities have benefited countless people in Miami for years, not to mention the work Alonzo has done through his ties with the Heat.  But now Alonzo will have his signature on Miami for a reason other then basketball.