Pat Riley and Dwyane Wade back at it, Heat make qualifying offers to Jamario Moon and Joel Anthony, Michael Beasley update and more...

Share All sharing options for: Pat Riley and Dwyane Wade back at it, Heat make qualifying offers to Jamario Moon and Joel Anthony, Michael Beasley update and more... 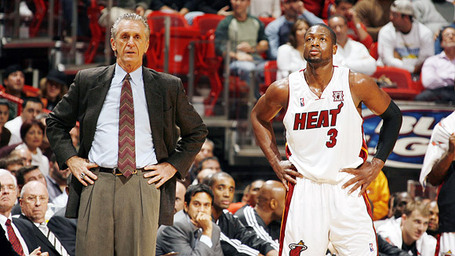 It seems like we're getting our fill of all the Dwyane Wade contract extension talk lately, Last week, Pat Riley came right out and said that he would not make any big roster moves until the Heat have D-Wade signed up to an extension. While speaking at length about the Heat's plans for the offseason, Riley told members of the media that he already has a proposal prepared for Wade and his agent, and will send that right to Dwyane 'one minute after midnight' on July 12th, which is the earliest date that D-Wade can sign an extension.

Again, nothing surprising here.  Wade is the ultimate priority to this franchise, and this isn't Pat Riley's first time to the 'superstar' rodeo.  He understands what it takes to build a team, and I'm sure that Wade knows this better then many of us.

''There can't be any major franchise changes made without his commitment,'' Riley said of Wade. ``I'm going to do the best sales job I can. What we do going forward is going to be predicated on that.''

A day after Riley made those comments, Wade came out with some quotes of his own.  He is making it no secret that he wants to win RIGHT NOW, despite the amount of big names coming available next summer.

"I'm there. Why not fast track this thing anyway while I'm there and let's not give it a chance to get to 2010?" said Wade. "I'm in my prime right now, playing the best basketball I've ever played, and I feel as good as I ever felt. So let's not wait. Let's do it now if we can do it. So it's not about me signing a contract."

Hmmmm.  It will be interesting to see what Pat Riley says to Wade when trying to 'sell' him on signing the extention now.  It looks like Riley will be ready to make some moves to put the right guys around Wade, but wants to make sure that the main centerpiece of this team will be in place first.  Understandable.

Should Riley get Wade on board by saying 'we will look to bring guys in right now, but first you have to sign', then suddenly the look of our team dramatically changes.  Imagine the message it would send should Wade extend rather then opt to be a free agent next summer, while his fellow superstars (LeBron, Amare, etc..) go out and test the market.  Who really wants to win?  Wade showing that kind of dedication could be something that sways another big name towards South Beach *caughLeBroncaugh*.  Here's a final thought by Wade...take from it what you will:

"I have a decision to make on my own, and that decision has nothing to do with anything that anyone is going to say," Wade said. "I always have the best interest of the basketball team every time I take the court. But in this stage, where you're talking about contracts and free agency, you have to think about yourself and what's best."

My take...this is Wade saying nothing.  'I love my team, gotta watch out for myself'.  Nothing in there about winning, and without knowing what he considers best for himself (whether it be another ring, moving home, etc), its impossible to get anything concrete from his comments.

This move was more a formality as the Heat extended qualifying offers to Jamario Moon and Joel Anthony.  Basically, the Heat have offered to pay them the minimum (both would get under $1 million), and can now match any offer made by another team.

As I've said before, I am all in favor of keeping Moon, but there just doesn't seem to be room on the roster for him.  As for Anthony...he is a center who is solid when coming off the bench for defensive purposes.  Will the Heat need a guy like that on their roster, or will they need someone in that position to provide a bit more offensively?  We shall see...

RILEY SAYS BEASLEY CAN PLAY THE 3 OR THE 4

Michael Beasley has been working hard at the AAA gym this summer on his ball handling, footwork and balance.  He has Pat Riley convinced that he is now a 3/4, but until I see how he fares on defense, I won't be convinced of anything.  But Beasley isn't the only one getting a hard summer workout in the Heat's house, as he is joined by Daequan Cook, Mario Chalmers and Dorell Wright for a couple months of 'Pat Riley boot camp'.

Sure, it's nice to read about how hard guys are working over the summer....but this is the NBA.  We aren't going to know diddily squat about how much these guys have improved until about November.  With the Heat not participating in the NBA's Summer League it gives us even less to evaluate any of our talent, and I've never been a fan of the pre-season as far as evaluating your team, as minutes and pairings are usually drastically different then during the regular season.

On the eve of the 2009 NBA Draft, the Heat are mulling over what to do with pick #s 43 and 60.  There have already been a couple interesting trades, and another big one is apparently in the works.  So much of what the Heat may or may not do weighs on where Pat Riley and Dwyane Wade stand, so you have to assume the two have gotten together over the past couple days to 'chat'.

For more draft talk, check out the latest from Ira Winderman.