James Jones still not 100%, Mario Chalmers getting off to a good start...and more

Share All sharing options for: James Jones still not 100%, Mario Chalmers getting off to a good start...and more 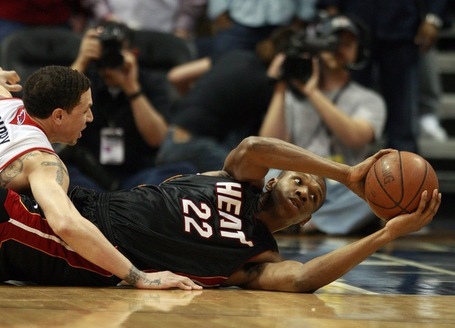 Greetings Heat faithful. As is the trend, we'll go over all the Heat news I can find and see where it takes us. Unfortunately, it's still hard to come by...but something is better then nothing! The first thing I'll touch on is something I read a couple days ago about James Jones. If you remember, I wrote a couple weeks ago how Jones was planning on having another surgery to increase the range of motion on his right wrist. But now there is some uncertainty from Jones about his impending surgery, as he feels that increasing the range that he can move his wrist may bring back some of the original problems (and pain) he had before his surgery last pre-season.

"To get my range back," he said, "I would have to have the surgery. But regaining that type of range was the issue from the beginning, is what caused me to have the deteriorating tendon."

Without the surgery, Jones thinks that he can operate at 80 percent of his usual self. Or should I say, 80 percent of the player the Heat signed as a free agent but haven't (and now, likely wont) seen on the court. Of course nobody could've foreseen the injury, but still...it kinda sucks when you bring in a free agent who will never play at the level you expect when bringing him in.

The question that I'd love to ask James is what part of his game is included in that '80 percent' he feels that he can operate on. You would assume that the injury only effects his shooting...so his defense and stamina should be the effected. If that is the case, then I can deal with Jones missing an extra shot or two if he can still provide the solid D that he has throughout his career. But then you have to think about if his wrist will hinder his ability to block and steal the ball. There are just so many variables that have to be considered, unless you can sit down and get some answers from Jones (which obviously won't happen), the answers wont be coming for another 5-6 months.

It hurts me when I think about how badly the Heat need exactly the kind of player that James Jones is/was....whatever. We need Eddie Jones from 5 years ago....or one of the biggest unsung hero's from our NBA Title-run, James Posey. Sure, it was annoying that he obviously picked up his game to another level when he saw fit (which explains how he was such a beast off the bench in the '06 Playoffs), but he could shoot, play shutdown D...just what we need from a small forward.

Another Heat player that will be looking to make an impact in his 2nd season with the team is Mario Chalmers, who will likely be spending a lot of time working on his ball handling and getting a consistent jumper. There were many times during the season I would notice Chalmers looking a little differently when taking a shot, which means he was constantly tweaking his form, trying to find the right touch. Now obviously he made some progress...I remember the first couple games he had shots that never touched the rim...but now he has a whole off-season to get that J looking good.

Chalmers will also be hosting a couple charity events through his 'Mario V Chalmers Foundation'; a golf tournament and a basketball camp. It's the first annual 'National Championship Classic' golf event on July 31st, which will be held at the Alvamar Public Country Club in Lawrence, Kansas. The basketball camps will be held in Salina, KA. It's nice to see Mario has wasted no time in reaching out and using his fame for the better. I'm liking this guy more and more everyday. I wouldn't be surprised to see Chalmers and Alonzo Mourning hook up at some point, same with D-Wade.

Moving on, Udonis Haslem is planning on getting to work a little earlier then usual this summer, but it has more to do with being hungry after the way the Heat's season ended then it does him being a free-agent after this summer. He also wants to keep working on his shot, which was off for almost the entire season. He finally began hitting shots with consistency at the very end of the season, but when he hurt his thumb it was just another setback for U-D. In an interview with Heat Insider, he said this of his thumb:

"It’s OK. I still have a little stiffness and soreness, but it’s getting better everyday. It’s something that we knew at the beginning of the process would take time over the summer to heal completely. I’ll definitely be ready for camp."

Finally, with the NBA Finals getting started tonight in the City of Angels, we at SB Nation have come across this funny new Vitamin Water commercial starring Orlando Magic center Dwight Howard. I mean, he's no Chris Bosh, but it's still worth a look. As for the finals...who do you got? I'll take Orlando in 6...and the legacy of Dwight Howard will begin. Just imagine if that guy had a jumper....talk about domination. Anyhoo, here is the aforementioned video...enjoy the finals!