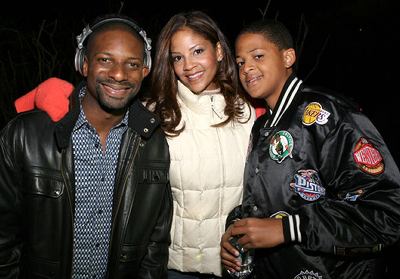 I pose a question to you Heat fans...do you consider D.J. Irie a part of the 'Heat family'?  Judging by the above picture that shows our home court D.J. with Alonzo Mourning's wife Tracy and son Alonzo III (who is also a Heat ball-boy), I'd say that the franchise has grown fond of the homegrown rising star.  If you are wondering why I suddenly decided to bring up our in-house 'spinner', I came across this article which gives you a look into the past, present and future of D.J. Irie.

It's really quite interesting, as he is about as 'Miami' as you can get when talking about life experiences (despite that he was born in the Virgin Islands).  His family survived their roof being literally torn off over their heads during Hurricane Andrew.  He has been a mainstay in Miami nightclubs since 1999, and being the hipsters they are...the Heat thought it would be a good idea to bring Irie in and make him our official team D.J.

Now he is working on his first album and is still spinning 6 nights a week for his hometown.  Here is a cool excerpt from the article I thought was pretty funny:

DJ Irie has as many NBA championship rings as Kevin Garnett, Paul Pierce and Ray Allen. He actually has one more than LeBron James and Hall of Famers Patrick Ewing, Charles Barkley and Dominique Wilkins combined. "I'm the only DJ to have an NBA championship ring," Irie said

Back to the Mourning family for a second...who announced earlier this week that he and his wife are expecting their third child.  Tracy was asked by a news crew how she was enjoying her workouts with Zo now that he was retired and had more time to spend with the family.  She responded with the announcement of her pregnancy and that she is carrying a boy.  So I guess that means they have been getting the most of their time together...!  All kidding aside, this is a great thing for the Mourning's and I couldn’t be happier for Zo and his kin.

Moon Not Taking Off?

Came across a little Jamario Moon tidbit...he is still recovering from the Sports Hernia surgery he had at the end of the season but should be able to resume playing sometime next month.  Moon is a restricted free agent and is hoping to come back and play for Miami again next season, but the Heat have small forwards James Jones, Dorell Wright and Yakhouba Diawara all signed up for next season.

All three will make more then the $711,000 Moon made last season, with Jones and Wright set to make $4 and $2 million respectively, and Diawara is going to make $855,000.  As of now, there are two guys on that list who I'd prefer seeing Moon instead of...but I just can't see the Heat carrying 4 small forwards.  Maybe they'll buy-out Kooba.  The only reason it's even a discussion right now is that apparently some Heat officials have told Moon ''they are really impressed with me".  Why would they lead him on if there we no intentions of keeping him around.  It's definitely something to think about.

Bosh IS Taking Off

The latest Chris Bosh news, in case you had not heard, is that he will not be extending his contract with Toronto and will test the free agent waters come July 1st, 2010.  As you can imagine, they are pretty pist off in Toronto...but isn't this exactly what anybody would've expected?  Even putting myself in a Raptor fans shoes...if Dwyane Wade came out tomorrow and said he didn’t want to talk anything about a new contract until next summer, that’s no surprise.  That is just what basically every other pro-athlete would do.  Now in the Raptors case, Bosh hasn't come out and said he plans to stay in Toronto as Wade has done with Miami...but still, there is no new twist to the story.  No surprises...just closure.

"There's Nothing Wrong With Ohio..."

What are Michael Beasley, Udonis Haslem, Mario Chalmers, Greg Oden and Mike Conley all doing in Dayton, Ohio?  They will be instructors for the Daequan Cook Basketball Skills Camp for boys and girls, which will happen at two different schools on June 22-23.  Get this...it's only going to cost kids $20 for the daylong camp, which includes lunch.  And the kids that can't afford it won't be turned away "...as long as there’s room in the gym".  How awesome is that?  This is such a great example of how these rich superstars still have deep roots and are willing to give back.

"The beauty of this camp is that kids who don’t get a chance to go to NBA games get to see some great players — who grew up in neighborhoods just like ours — up close and personal," said Albert Powell, Dunbar assistant coach and camp coordinator.  "The NBA does a great job encouraging players to give back to their communities, and that’s what Daequan is all about. He’s a great role model. He’s trying to show kids that if you work hard enough, you’ll be a productive citizen. You may not become an NBA player, but you’ll be a success in life."