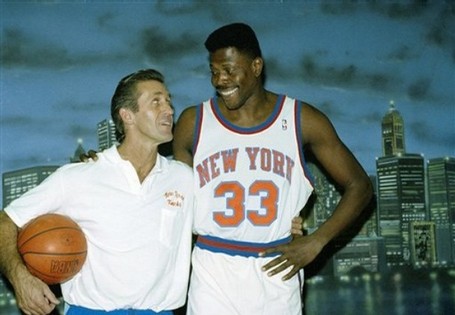 It all started in 1991, when Pat Riley was hired to be the new coach for the New York Knicks.  He already had a reputation as the premiere coach in the NBA, and now was going to the premiere city in the US to take a lowly Knicks team to the top.  It didn't take long for the Riley effect to take place, with Pat leading the Knicks to the NBA Finals in just his 3rd season.  White they couldn't get past Houston in the 1994 Finals, it seemed that the table was set for the Knicks to be a force in the Eastern Conference for years to come.

The following year New York fell short of the Atlantic Division crown, finishing the season 2 games behind the Orlando Magic.  The Knicks also faltered in the playoffs, losing in the 2nd round to the Indiana Pacers, a team that would get the best of the New York several times in the playoffs during the 90's.

After the big let down following their trip to the NBA Finals, Pat Riley stepped down as coach of the Knicks.  Many speculated as to his reasons; some thought that Pat felt the Knicks best days were behind them while others said that he wanted more power in the organization, giving him the ability to choose his own team.

Those questions were answered on September 2nd, 1995 when Micky Arison introduced Pat Riley as the new Team President and Head Coach of the Miami Heat.  Now Riley had his coaching job and the ability to build his team, his way.  Following the hiring of Riley by Miami, the Knicks accused the Heat of tampering with Riley while he was still under contract with New York.  This resulted in the Heat sending their 1st round pick in 1996 to the Knicks along with $1 million in cash.  The pick ended up being the 19th overall, used to draft guard Walter McCarty.

Riley's first year in Miami could be best remembered for the house cleaning that took place, as he got rid of many of Miami's past players in order to bring in key players Alonzo Mourning and Tim Hardaway.  Despite the constant roster changes, the Heat still managed to squeak into the playoffs with the 8th seed.  Unfortunately, that meant playing the top seeded Bulls, who won an NBA record 72 games that season.

Thankfully, the 1st round was only a best of 5 back then.  However, despite the 3-game sweep, the Heat were on their way.  The Knicks also made the playoffs that year under the guidance of new Head Coach Jeff Van Gundy.  They swept Cleveland in the 1st round only to face those same Bulls in round 2.  But now the stage was set, and the rivalry would begin ‘heating up' the next season.