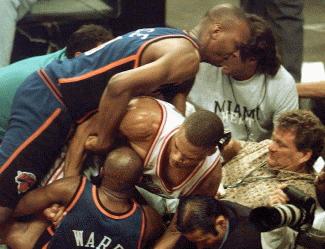 The first big Heat-Knicks game of the 96-97 season came in April with the two teams battling for the Atlantic Division crown.  A controversial 3-pointer by Sasha Danilovic that would've tied the game in the final minute was ruled a 2 after the referee's convened, and the Heat ended up losing by one.  Miami still managed to hold off the Knicks for their first Division title and the 2nd seed in the East (of course Chicago was #1).  New York didn't fall far in the standings, claiming the 3 seed.

Before the teams could meet in the playoffs, the Heat had to first get past Orlando in the 1st round.  A series that was much better then some would've thought saw the home team win each game, including a series winning 5th and deciding game for Miami.  Meanwhile, the Knicks breezed through a 1st round sweep of Charlotte, and the 1st ever Heat-Knicks playoff series was set.

Game 1 was close until the very end, but Patrick Ewing put the game away in the final minute with a big dunk.  The Heat rebounded in Game 2 thanks to a big three-pointer by Jamal Mashburn, and the series was tied heading back to Madison Square Garden.  It was there that the Knicks took hold of the series.  It was Ewing again in Game 3, but this time it was his defense.  He came out to the three-point line to block Tim Hardaway's game-tying 3 attempt, then secured the ball and the game for New York.  Game 4 was pretty much all Knicks as they cruised to an 11-point win and a commanding 3-1 series lead. 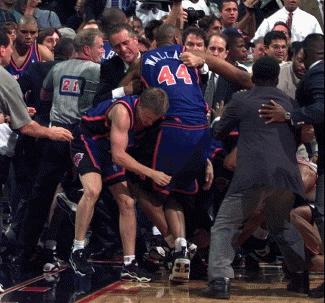 Game 5 is still probably one of the most memorable Heat games in the franchise's history, and it certainly had a lasting effect on this playoff series and the Heat-Knicks rivalry as well.  During the 4th quarter of a lop-sided Heat win, Miami forward P.J. Brown and Knicks point guard Charlie Ward were jostling for position after a missed free throw, but Brown flipped Ward over his shoulder, body slamming the smaller player.  This led to the memorable brawl between the Heat and Knicks, which took place under the basket in front of the Knicks bench, leading to several Knicks leaving the bench to join the fight.  Unfortunately for New York, those players were Patrick Ewing, Allan Houston, John Starks and Larry Johnson, all of whom were suspended 1-game for leaving the bench during an on-court altercation.

Ewing, Houston and Ward all missed Game 6 while Johnson and Starks sat out Game 7.  The Knicks were unable to be as competitive without their core group of players, and the Heat came away with an improbable win against a Knicks team many thought were poised to take down the mighty Chicago Bulls (who beat Miami 4 games to 1 in the Eastern Conference Finals).

Needless to say, the rivalry was in the midst of its most heated times.  The following season Miami won their 2nd straight Atlantic Division crown, while the Knicks fell all the way to the 7th seed.  This meant that the Knicks wouldn't have to wait until the 2nd round of the playoffs to get another shot at Miami, as the teams would meet in round 1.  As if the Knicks weren't mad enough after the way the previous years playoffs went down, New York was also denied a victory by NBA Officials when a would-be game winning tip in by Allan Houston was waived off, apparently being touched after the buzzer.  Replays would show otherwise, but the NBA denied the Knicks protest.

With the Heat poised to make another run at the Bulls and the Knicks falling in the standings, the 1st round series was still surrounded by drama following the previous year's playoff meeting.  However this year the Knicks would be without Patrick Ewing, who was out with a wrist injury.  The teams split the first 4 games, with neither team looking amazingly better then the other.  Game 4 would be another memorable one, and again it was due to a fight.  This time it was between former Hornets teammates Alonzo Mourning and Larry Johnson.  If you recall, neither landed a punch despite about 20 being thrown, but the lasting image is of Jeff Van Gundy hanging on Zo's leg during the fight.

Unfortunately, this led to suspensions for both players and the Zo-less Heat lost Game 5 at home despite making a crazy comeback attempt.  The Heat trailed by 20 at the half, but thanks to a lot of clutch shooting by Timmy Hardaway drew within 2 points in the 4th quarter.  The Knicks would again take over and soon the lead was back at 13, and the game was out of reach for Miami.

The teams were now even at 1 win apiece in Playoff meetings, but little did they know that destiny was not finished messing with the Heat and Knicks.