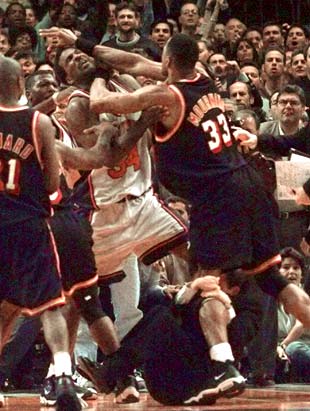 The 98-99 season was shortened to 50-games due to a lockout, and it didn't begin until February 5th, 1999.  The Heat were able to claim the 1st seed in the East, finishing with the same 33-17 record as Orlando and Indiana, but held tiebreakers that allowed them to finish ahead of both teams.  The Knicks didn't find their groove until late in the short season and squeaked into the playoffs, finishing 1 game ahead of the Charlotte Hornets.

The Knicks got an early jump on the Heat, ending any ‘1 seed always dominates the 8 seed' thoughts.  They beat Miami by 20 points at the Miami Arena in Game 1, and took Game 3 in New York as well, and looked to shock the Heat with a would've been series ending Game 4 victory.  Miami overcame an 8-point deficit and rallied to beat the Knicks by 15, sending the series back to Miami for a decisive 5th game.

A defensive struggle, the teams fought back and fourth in Game 5 until the Heat held a 1-point lead in the final seconds.  Fate would then step in for the Knicks, as Allan Houston hit a running jumper that bounced on the rim a few hundred times before finally falling with only 0.8 seconds left, propelling the Knicks to an improbable series victory that would be the beginning of a Playoff run that would take them all the way to the NBA Finals, where the Knicks fell in 5 games to the Spurs for their 1st NBA Title.

The following season would see the Heat win their 4th straight Atlantic Division title, but this time the Knicks were not far behind, grabbing the 3rd seed in the East.  The two teams breezed through the 1st round, with the Heat sweeping the Pistons and the Knicks sweeping Toronto.

This would make it the 4th straight year that the Heat and Knicks faced each other in the postseason, and for the 4th time Miami hosted Game 1.  The series was very evenly matched, and the teams would split Games 1-through-6.  One memorable moment from those games came in overtime during Game 3.  After Patrick Ewing sent the game to OT by hitting a clutch jumper with just two seconds left, then hit a couple free throws to put the Knicks up by 1 in the final seconds of OT.

It was then time for rookie Anthony Carter to make a crazy shot that would again stir up controversy.  He drove the baseline and put up a shot from behind the backboard, which traveled over the glass, hit the front rim and dropped in with 2.1 seconds left.  Of course, the Knicks would protest but to no avail, and the two points by Carter would be the deciding ones of the game.

The rest of the series would be a sequence of missed Heat opportunities.  Miami held a 15-point halftime lead in Game 6, leading the series 3-2.  The Knicks would battle back and take a 2-point lead in the waning moments, and Anthony Carter missed a 3 at the buzzer that would've ended the series had it gone in.  Game 7 was a similar story, with Miami going up by double digits in the 1st half only to see New York battle back yet again, culminating in a Patrick Ewing dunk with just over a minute left that put the Knicks up by one in the final minute.

The score would stay that way into the final seconds when Miami held the ball with another chance to win the series.  Whatever play the Heat called must have fallen apart, because of all people, Clarence Weatherspoon took the final shot for the Heat, which of course fell on the way side.

This would mark the end of the Heat-Knicks playoff rivalry, and really the rivalry all together.  The Knicks and Heat have not both been good at the same time since then, and all the ‘heat' between the two teams has fizzled out.  The closest thing to excitement between the two teams has been thanks to Dwyane Wade.  He hit a cold blooded buzzer beater in Madison Square Garden in March of 05, getting right in the face of uber Knick-fan Spike Lee.

Then this past season Wade and the Heat slapped the Knicks twice in Miami, with Dwyane led the Heat back from a 16-point 2nd half deficit with 24 4th quarter points in front of a packed house.  Then in April, Wade scored a career-high 55 points against the Knicks, falling just 1-point short of the Heat franchise mark set by Glen Rice in 1995.  Could any of that spark a new rivalry?  Probably not....at least not until the Knicks re-enter the world of competitive basketball.

Every series between the two teams went the full amount of games, and each deciding game came down to the final minutes.  It's really a shame that the rivalry didn't last longer because it has the making of something that could last a very long time, especially with all the transplanted New Yorkers that live in South Florida.