Weekend Video Time: 'Appreciation For What We Have' Edition

Share All sharing options for: Weekend Video Time: 'Appreciation For What We Have' Edition 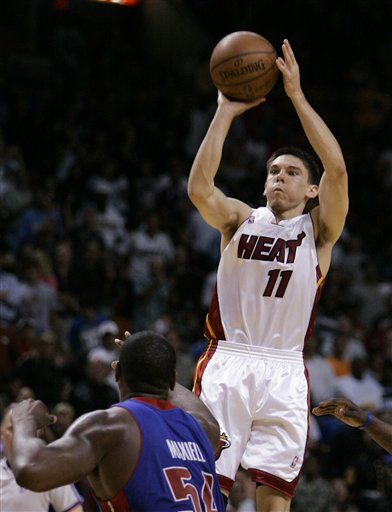 After seeing that Andre' Miller had signed with Portland for $9 million less then he was originally asking (He wanted 3 years $30 mil, he got 3 years $21 mil), it seemed to make me aware of how little attention has been payed to our point guard 'situation'.

The Heat seem to be content with Mario Chalmers and Chris Quinn, and while you can look around the league and find 'upgrades' over both young players, in Quinn's case he has gotten better every off-season, and Chalmers did a solid job starting every game of his rookie season in the NBA.

So thinking about this led me to remembering the last game of the this past regular season.  We had all of our back-ups in the game, other then Chalmers who played 22 min.  No Wade, Haslem, or Jermaine O'Neal.  Not to take away from the Pistons, who played without Rip Hamilton and limited Rasheed Wallace and Tayshaun Prince to only nine minutes.

Who would've thought that this would be one of the most exciting (and fun!) games of the season.  And It was a night where Chris Quinn decided to break out in a big way...showing the offensive ability that should come from a guy in his position, and more. In 31 min off the bench, he scored a career-high 26 points (on 9-of-13 shooting/3-of-6 from 3) adding 4 boards and 5 assists, and shot a perfect 5-for-5 from the foul line.  His clutch shooting down the stretch showed that he has the ability to be a good 2nd option off the bench, if only he could do this on a consistent basis.  We'll see what the new season brings...

After the jump are the Quinn highlights from that game.  Hopefully, you'll be reliving the night much like I did.  Enjoy!