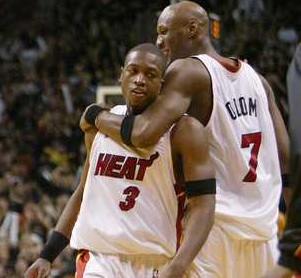 Just a quick review of what happened in Heat-land this week…in case the new Lamar Odom rumors have drawn most/all of your attention.

No surprise...no big deal....but as we expected, the Heat didn't match the Cavaliers offer sheet extended to Jamario Moon.  So now Moon will join LeBron James, Shaq and the rest of the kingdom and he'll be a nice fit.  Said Pat Riley on the decision to let Moon go:

``We declined to match because we wanted to stay true to our plan of not adding salary to our 2010 cap,'' Riley said. ``And matching it would have reduced our flexibility.''

Obviously that is the plan ‘unless’ Lamar Odom signs here, then all bets are off.  But for now you can only work with what you control, so I can understand where Riley is coming from.  One way or another, there are going to be some major moves made by the Heat, but whether it’s this summer or next has yet to bee seen.

It also came out last week that guard Luther Head, who played 10 games with the Heat last season before suffering a season ending hand injury, is expecting to hear from the team regarding a contract for the upcoming season.  Also showing interest in Heat are Indiana, Philadelphia and Chicago.  The Heat have been monitoring Head’s off-season workouts and I’m sure we’ll know soon enough if they consider him an upgrade over Chris Quinn.

Also, I’m starting to hear whispers around the internet that Michael Beasley’s name has began to pop up in the Carlos Boozer trade talk.  There has been nothing concrete that has been confirmed, so don’t get crazy.  I’m just passing along the RUMOR, in case you guys were interested.

Now…a little more discussion about the Lamar Odom situation.  Dwyane Wade is back at trying to lure Odom back to Miami, and he is using the mega-communication tool of Twitter to do this.  In a tweet on Saturday, after the story came out about Odom ‘strongly leaning’ towards the Heat, Wade twatted:

"This is for Lamar Odom ... come back to where it started for both of us.. the franchise u help build back up wants u to End it all here."

Of course, Odom will likely give himself a better chance at another NBA title by staying with the Lakers, but Lamar isn’t ‘that’ guy.  Things are much more personal to Odom, who will likely be more suited to join the team that ‘wants him more’ instead of going where there is a little more money.  Remember, he’s won his title.  Now he could be thinking about the rest of his career, and being as happy as possible while playing it out.

Considering his (apparent) close friendship with D-Wade, the attraction of moving back ‘home’ to Miami and playing for the great Pat Riley again…well that may just be enough to entice him back to the 305.  That, and the fact that the Lakers do not seem to be that interested in bring Odom back.

Hopefully we’ll get some kind of concrete information or maybe even, dare I say…a decision by Odom, sometime this week.  I’m sure that he’d like to drag this out as long as possible to see if anybody will jump in with a better deal, but in the meantime we’ll just keep on watching and waiting with our fingers crossed.

To be honest, I’m pretty impartial because I know that regardless who we get in the next year or so, Riley will bring in some major talent to play with Dwyane Wade.  But if bringing in Odom now will keep Wade happy, then go for it.  Whatever it takes to keep Wade in town, although I still don’t think he will be going anywhere, no matter what the Heat may or may not do this summer.