Lamar Odom to make decision "in the next few days"

Share All sharing options for: Lamar Odom to make decision "in the next few days" 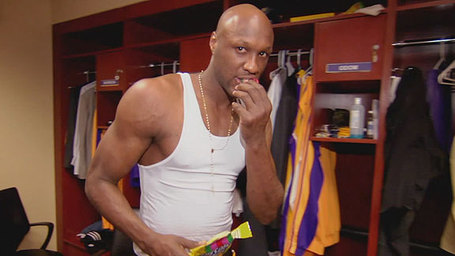 Reports are popping up all over the place today that not only is Lamar Odom favoring signing back with the Heat, but that a decision on the matter will be coming "in the next few days", according to a source 'with knowledge of the talks' (told to ESPN). The options for Odom to mull over aren't as attractive as they were a couple weeks ago. The Lakers have since reduced their offer of 3-years $27 million, while the Heat still have a couple different contract options lined up for Odom, all of which are quite reasonable and lucrative.

Another source maintains that Odom's preference remains returning to the Lakers after helping them win a championship in June but cautioned that he is prepared to return to Miami and reunite with Wade and Riley if nothing changes this week.

Another twist to the story was sent out via Twitter, thanks to Dwyane Wade. He has been getting more and more into petitioning to bring Odom home, thanks to his new favorite online communication tool. Last night he sent out a tweet saying:

"I'm in LA to bring odom bac to miami with me lol lol lol. LA fans dnt get mad at me.."

This is pretty cool...that our superstar would go to these lengths to bring Odom to the Heat. Now, its coming out more that Wade and Odom are close, so the question is...would Dwyane be making this same effort for an equally talented player that he wasn't already friends with? Just something to consider...

What makes Wade being in L.A. even more interesting is that Pat Riley is also in the City of Angels this week, but it is unknown if there is any meeting set up between he and Odom. I imagine Riley is ready to pounce on Lamar as soon as he is 'done' with the Lakers. We'll see how Jerry Buss plays it; if he's been lowballing Odom, now is when we'll find out.

In any event, I will keep you posted as soon as I hear anything.