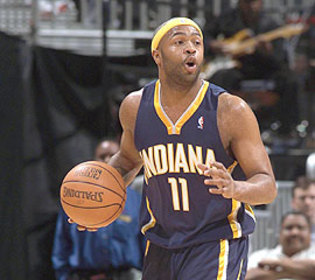 As if we weren't being bombarded with enough potential acquisition drama, now we have reports that the Heat are "front-runners" to sign Jamaal Tinsley, according to a league source. Of course, the Heat would be looking to sign Tinsley under the same mid-level exception they were thinking of using on Allen Iverson.

Tinsley can certainly be considered a 'veteran' and I'd assume that if he signs with the Heat, he'll have had a conversation with Pat Riley about mentoring our young guards (Chalmers, Cook and Beverly). If that is the case, this could be an amazing move for Miami.

It's kind of sick to think that the Heat could possibly bring in Lamar Odom, Jamaal Tinsley and even Carlos Boozer in the next few days. I think the Boozer deal is dependant on whether or not the Heat bring in either or both of the other guys, but once the wheels are in motion, Pat Riley will make every possible move to put the Heat in the best possible position to make a title run.