Lamar Odom says 'Thanks, but no thanks' to Dwyane Wade and Pat Riley

Share All sharing options for: Lamar Odom says 'Thanks, but no thanks' to Dwyane Wade and Pat Riley 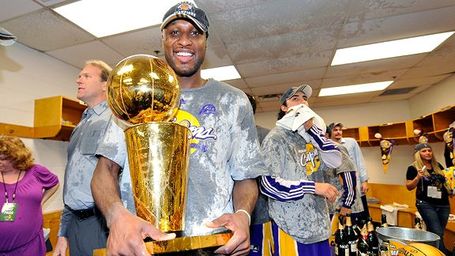 Well...there you have it.  For whatever reason, Odom seems to have chosen staying in L.A. with Kobe and Ron Artest instead of coming to South Beach to play with the likes of Wade, Beasley and co.  The only real concern I have is that Dwyane Wade will feel somewhat demoralized after trying fairly hard (from what we could tell) to lure Odom to Miami...but the positive to take from this is how dedicated Wade seems to be about improving 'his' franchise. Dwyane's final 'tweet' on the Odom saga:

You can't fault Odom for making the 'smart' move and staying with the Lakers.  He's been with them for the last 5 seasons, they just won a championship and are poised to make a run at another one.  Miami offered him as much as they could, but apparently this just wasn't the 'right move'.

I still stand firm that Wade isn't leaving, and now we see how despite what he says, Pat Riley is going to do whatever he can to get Dwyane some sidekicks to try and build a dynasty.

On that note, the Heat are scheduled to meet with Jamaal Tinsley sometime this weekend.  I see that (according to the comments) many of you are not in favor of bringing Tinsley to Miami because of the problems he had in Indiana.  But just keep in mind that there is no way Riley will bring a 'bad seed' to the Heat.  If we could survive Antoine Walker and Ricky Davis, I'm not worried about Tinsley.

If the Heat tries to sign Tinsley, it could use part of the mid-level exception, its $1.9 million bi-annual exception or offer merely the $1 million veteran's minimum.  Tinsley's agent Raymond Brothers said Thursday that the Heat's interest in Tinsley appears genuine, and the interest is mutual.

Tinsley sat out the entire 2008-2009 season by request of the Pacers, who bought out his remaining $14.7 million contract by paying him $10.7.  I'd imagine that whatever off-court problems that let to the Pacers and their fans being so upset with Tinsley were thought about during the year he spent sitting on his butt, and he's likely ready to get back to just playing ball, preferably with a team like the Heat who features one of (if not the) best player in the NBA and one of the best coaches to ever grace the sport.

Tinsley was involved in three late-night incidents in a 14-month span in 2006 and 2007, but has not been convicted of any crime. The most serious: He faced a felony charge of intimidation and misdemeanor counts of battery, disorderly conduct and intimidation after a bar fight in Indianapolis in February 2007, but agreed with prosecutors that if he stayed out of trouble for two years, all charges would be dropped.

Pat Riley won't bring anyone to the Heat who would hurt out team, on or off the court.  Tinsley will help with the maturation of our younger guards and even though we aren't bring in Lamar Odom, there is still a plan in place for the Heat to make some big moves in the future.  Riley tried to make some things happen this summer, but there is no need to force anything now.  Let's just keep moving forward, keep working hard and have faith.  Good things are coming for the Heat...but you know what they say: "All good things come to those who wait".  So if you can, just be patient my friends...good things are coming.