Will Allen Iverson and Dwyane Wade be able to play well together?

Share All sharing options for: Will Allen Iverson and Dwyane Wade be able to play well together? 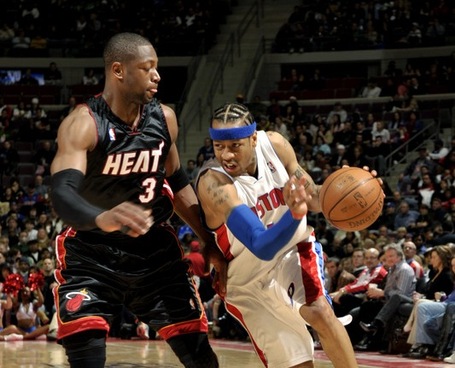 Sticking with the Allen Iverson/Heat guard 'problem' for a moment, we have to realize the full effect of signing the former 4-time scoring champ to play with Dwyane Wade.  First of all, Iverson was very openly unhappy after being demoted to the bench in Detroit last season, and we all remember how that played out.  Images of Iverson sitting on the bench, slouched down with his arms folded across his chest and a towel on his head are still very clear in my head...and after Riley told us that Mario Chalmers will be our starting point guard next season, it's an interesting thought as to why Iverson would choose to sign with Miami.

Now personally, I'm not against the move of signing Iverson, and here is why.  We would only be signing him for one season, and it looks to be a 'transitional' year anyway.  Everything Riley is doing is to prepare the Heat to re-sign Dwyane Wade and also bring in a top-tier free agent next summer.  But brining in a popular name like Allen Iverson would certainly sell more tickets and give the Heat some scoring depth, which was very inconsistent from our bench last season.

I can't see how Iverson playing in a Heat uniform would translate into less wins for us this coming season, and I'm also willing to bet that it wouldn't make D-Wade unhappy to see Riley bring in another big name that would bring some excitement to the AAA court.

Of course, there are plenty of reasons for people to be against the move, and I can certainly see things from their point of view.  For those of you looking to read about all the reasons NOT to sign Iverson, I highly suggest checking out Israel Gutierrez's latest article in the Miami Herald.  One thing that caught my eye was this part:

All you have to do is remember what happened in Denver when he played with Carmelo Anthony. They were teammates, but they didn't make a team. They were two individual scoring talents that never melded into anything formidable. Iverson scored 26.4 points a game his last full year in Denver, while Anthony averaged 25.7 a game. All that translated to was a No. 8 seed out West and a four-game, first-round sweep at the hands of the Lakers.

Sure, I can see that happening here, but lets be realistic for a moment.  Miami is not likely to contend for an NBA title this season, and signing Iverson may do more to solidify that then not signing him.  However, I am more interested in the consistent winning and title contention that the Heat held from 2004-2007.  It's hard to call this season a 'throw away' because we'll still have a very strong squad that will win a good amount of games...but looking at Cleveland, Orlando and Boston (without mentioning some of the lower ranked teams making moves as well), it's hard to see our roster matching up with any of them in a 7-game series.

So don't kill me, I'm just trying to be realistic.  Granted, Mario Chalmers and Michael Beasley could improve by leaps and bounds, James Jones could have a full season playing back to his sharpshooting form and Jermaine O'Neal could prove to be an amazing improvement in a contract year after a summers worth of hard work.  That would be awesome!  But...the word 'could' pops up in that sentence several times, and I think there is a better chance of Beasley and Chalmers coming into their own after they get another full season under their belts. The 3rd season is usually the 'break out' year and I have to go along with that, although I'd love for that to be expedited.

Now, let's say the Heat don't sign Iverson.  Where does that leave us?  As of now we have Chalmers and Chris Quinn signed up for next season, and draft pick Patrick Beverly still remains unsigned.   It's likely that he will sign though; why else would Riley spend $1.5 million and a 2011 2nd round pick to acquire his rights from the Lakers during the draft.  Ira Winderman wrote in his blog:

On the other hand, a rotation at point guard of Mario Chalmers, Chris Quinn and Beverley would leave the Heat with a grand total of four years of NBA experience at the position. Unless the Heat could find a place to dump the $1.1 million Quinn is due this season, keeping Beverley could mean bypassing such remaining veteran free-agent options at the position as Bobby Jackson, Brevin Knight, Ty Lue, Mike Wilks, Stephon Marbury, Jamaal Tinsley and, of course, Allen Iverson.

I have to agree that bringing in a veteran presence to help mentor our young backcourt would be wise.  Remember, we still have a young Daequan Cook as well, who is coming into his 3rd season in the NBA and will likely be the backup 2 guard behind D-Wade.  The way his level of play significantly dropped off last season, I wouldn't mind having someone to help pick him (and the other youngsters) up when they are down.  Some of those "I've been there, you'll bounce back" stories would certainly help the confidence of some unsure youngsters.