How will Quentin Richardson fit in with the Heat?

Share All sharing options for: How will Quentin Richardson fit in with the Heat? 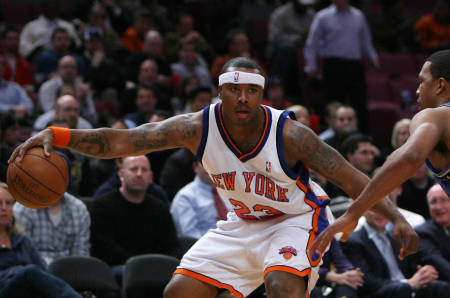 Now that things have settled down after a busy weekend, I can jot down my take on the Quentin Richardson trade. Like most of you, I was shocked by this move. The Heat make a move out of nowhere, and somehow get a team to take on Mark Blount and his giant salary. There aren't many 3rd and 4th stringers out there making $8 million a year.

But instead, the Heat have acquired a player who will step right in and compete for playing time at a position where we may have several potential gamers, but nothing has been proven yet (at least not in a Heat uniform, in the case of James Jones).

I wouldn't expect to see the same Quentin Richardson you may have seen last year in New York. He spent most of the year in pain, recovering from back surgery that he had in March of 2007. Still, he only missed 7 games due to injury last season, which is impressive when compared to his game totals during his previous 3 years (55, 49 and 65).

Recovery wise, he should be able to play in just as many games as last season, if not more. If its production you're wondering about, I'd look for him to be more consistent then last year. If you look at his numbers, there are times where Richardson would have a good game then disappear for the next game or 2. Often times he'd be dealing with soreness that isn't expected to as big of an issue this year.

Now one of the best things that I feel Richardson will bring to the table for the Heat is his defense. A healthier back will lead to more stability on the defensive side, allowing for more mobility and for longer periods of time. The Heat haven't had a shut down defensive swingman since Eddie Jones was around, and while Richardson may be comparable to Eddie, I won't be convinced until I see it on the court. Still, it's nice to know that the ability is there from Quentin.

Another positive is the relationship Richardson has with Dwyane Wade. The two are good friends and have been for several years. Now you take a guy who has been a leader on every team he has been on (Richardson) and throw him on a team where his good friend is the face of the franchise. The combination could be great in the Heat locker room, as this is a team that has always thrived when camaraderie reigned supreme.

The main (and only, really) problem that I have with Richardson is that he can sometimes remind you of Antoine Walker. His shot selection is questionable at times, due largely to the clankers he puts up. I've seen shots that hit parts of the backboard that should never be hit when taking outside jumpers.

He also has the tendency to hold the ball longer then he should, and if he does that when on the court with D-Wade, that will be a problem. When he was on the Knicks he may have felt that it was more necessary for him to ‘ball-hog' with their lack of stars and scoring punch.

I'm not trying to scare you...this trade still has me very pleased. You know me; I like to give the ‘big picture'.