Is the Heat's answer at PG waiting in Orlando? Hello Anthony Johnson...

Share All sharing options for: Is the Heat's answer at PG waiting in Orlando? Hello Anthony Johnson... 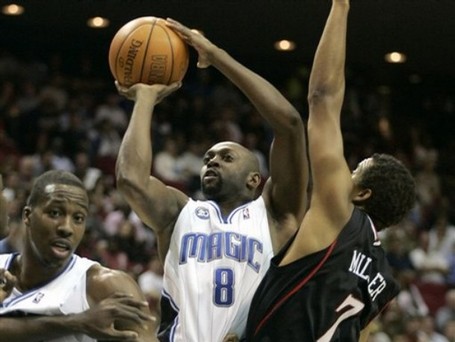 Why is Dwight Howard looking at the camera...?

With former Heat point guard Jason Williams signing with Orlando earlier this week, it bumped their steady backup Anthony Johnson to 3rd on the depth chard behind Williams and Jameer Nelson (assuming Williams is playing well enough to be the backup).

Johnson has played for 7 different teams over his 12-year career (also traveling through the D-League and several free-agent summer camps) providing solid, consistent minutes mostly as a back up.  He's a career 41% shooter (has averaged over 40% for 8 straight seasons) who provides good defense and a veteran presence on the court.

In the final year of his contract, which is a huge consideration for the Heat, Johnson is due $2,062,800 this season, which also would fit into the trade exception the Heat holds from last February's Jermaine O'Neal trade. The Heat's interest in Johnson dates to when it tried to acquire him from Dallas at the trading deadline in 2007, with its offer trumped by Atlanta.

Johnson was very open about how upsetting it was when he was demoted to 3rd on the Magic PG depth chart during last seasons NBA Finals.  After backing up Jameer Nelson, then Rafer Alston, all season and through the first 3 rounds of the Playoffs, Johnson was pushed to the back of the line when Nelson returned for the Finals.

"This is the toughest thing that's ever happened to me,'' Johnson said during the 2009 NBA Finals. "I've dealt with a lot of stuff through the years, but to help my team get to the Finals, the biggest stage in basketball, and then get told you're not going to play, that has been very, very difficult.''

Signing with Miami would make sense, adding the veteran leadership they need and a stable defender they've lacked in the backup PG position.  The only thing to keep in mind is that the Heat would be picking up Johnson's $2 million dollar contract that would be doubled due to the luxury tax penalty.  However, should the Heat trade off a guy like Udonis Haslem or Dorell Wright (both in final years of their contract), it would make this decision a no-brainer for the Heat.

Haslem is going to make $7.1 million this season and Wright is set to make $2.7.