Michael Beasley with a big 'boo-boo'.

Share All sharing options for: Michael Beasley with a big 'boo-boo'. 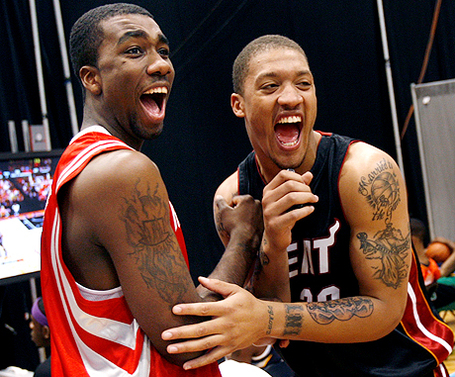 Once again, the online phenomenon known as Twitter has allowed someone in the spotlight to make news for themselves.  This time, it's our own Michael Beasley and unfortunately the story isn't a good one.

Beasley recently got a new tattoo and decided to take a picture of it and send it out via his TwitPic account.  The problem isn't the tattoo; it's what appears to be in the background of the picture.  I won't say anything here, but you can follow this link to the picture and make your own assumptions.

After the boo-boo and subsequent bombing by people commenting on the picture, Beasley made a few distressing Tweets before completely deleting his Twitter account.

About 1 day ago by Michael Beasley

GorillaBeas Feelin like it's not worth livin!!!!!!! I'm done

About 20 hours ago by Michael Beasley

GorillaBeas not feelin this at all!!!!!

About 15 hours ago by Michael Beasley

Should this turn into any kind of big story, it wont be good for Beasley.  Remember, he was already caught in a weed-related situation during last summers rookie symposium (or whatever it's called) with fellow Heat nubie Mario Chalmers.  Rio has since stayed out of trouble and according to his Twitter, has been working very hard during the off-season preparing for his sophomore season.

Beasley, however, seems not to care as much about his 'image' as he constantly goofed off and raised eyebrows during his rookie campaign.