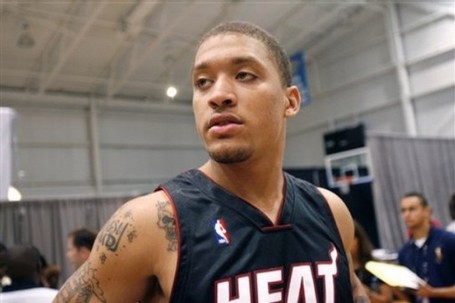 Michael Beasley has reportedly checked into a Houston area rehabilitation hospital.  Sometime over the weekend (probably on Sunday), Beasley was admitted to an unidentified Houston rehab clinic, according to Yahoo! Sports.

Apparently the Heat encouraged their young star to check in.

Sources said the Heat encouraged Beasley to check into the facility to address possible substance and psychological issues. He is expected to spend time with former NBA player and coach John Lucas who is renown for his success in working with troubled players.

This is a major shock to me...even after the distressing Twitter messages he made a few days ago.

@mikebeasleysr -What Michael jr.Is going thur is just a bump on the road we call life,please pray for him ,he needs it. Thank you

There is so much more to this story then weed.  Is it time to be seriously concerned for the youngster?  We knew he was immature and a bit insecure, but never would've imagined that it was this serious.  I really hope Beasley gets the help he needs, but hopefully this is just a simple issue of a young man growing up way too fast.  Hopefully he can learn how to handle his life and understand what to and what not to worry about....assuming it's that 'simple'.