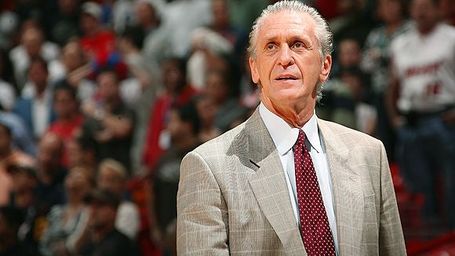 Allen Iverson may still be hoping to play for the Heat this season, but it's looking more and more unlikely as time continues to go by.  It seems that Pat Riley is done making moves this offseason, apparently happy to let his youthful backcourt gain experience through significant playing time.

League sources with knowledge of the Heat's thinking at this point suggested Friday that Riley has essentially abandoned any thought of addressing his lack of point guard depth through free agency.

Sources close to Iverson say that he received a 1-year offer from Memphis in the $3.5 million range, and that those figures were reported to Pat Riley, who requested Iverson do this if he wanted Riley to consider signing the free agent.

Now it appears that Riley is not interested in bringing in any new free agents, which means Jamaal Tinsley and the rest of the unemployed guards in the league need look outside of Miami for job opportunities.

The Heat are already about $3 million over the luxury tax threshold (set at $69.9 for next season) which is a big part of why they aren't looking to bring any other money in without dumping some of their own.  Remember, for every dollar they go over the luxury tax, they owe the same amount to the league.  So if they we're to sign Allen Iverson for $3.5 million, the Heat would owe a total of $7 million ($3.5 to Iverson and $3.5 to the league).

Just because Miami doesn't want to sign anyone new doesn't mean they are done making moves.  A trade is a likely situation, but only if the player(s) they trade make more then the player(s) they bring in.  After increasing their salary by just about $1.5 million in the Quentin Richardson trade, I imagine there is no way the Heat will be adding any more salary on top of what they are already paying.

The Heat have some options as far as what they could give up.  There are several ‘expendable' players on our roster that could be valuable trade chips.

As for what the Heat has to offer, there are two potential first-round picks in next June's draft, as well as the rights to players on the current roster, such as Quinn, Dorell Wright, James Jones or possibly even Daequan Cook or Udonis Haslem.

European powerhouse team Olympikos announced this week they have signed Patrick Beverly to a 2-year deal, but he will still be eligible to play for the Heat next season.  Combine this news with Riley's claim to be done searching for free agents and the likelihood of a trade seems higher.

Now both players the Heat selected in the draft are overseas with Robert Dozier also signing to play in Greece in the coming season.