Allen Iverson is still a possibility for the Heat, but is that 'the answer'?

Share All sharing options for: Allen Iverson is still a possibility for the Heat, but is that 'the answer'? 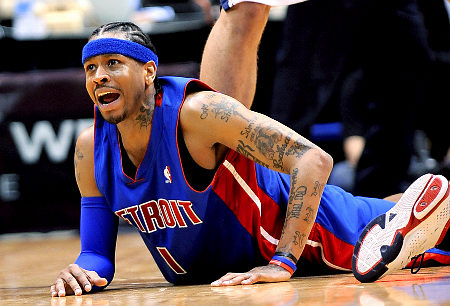 Pat Riley apparently is still interested in bringing in veteran guard Allen Iverson to join the 2009-2010 Miami Heat squad.  According to the Miami Herald, a source close to Iverson said that Riley has contacted the former All-Star and this is what 'the source' had to say:

Riley reached out to the 10-time NBA All-Star recently to let him know that the Heat "has continued interest in (Iverson's) services" and also that Miami "could be a great opportunity for us."

Keep in mind the comments by Riley saying he wouldn't be bringing anyone in to start over Mario Chalmers, so you have to wonder what the conversation would be between Iverson and Riley.  I'm sure its safe to say that Iverson holds a high opinion of himself, and the Heat aren't exactly looking like 'contenders' for next year, so what could Riley possibly say to convince him to sign here.

Iverson did say he would love to play in Miami with D-Wade if he could come to an agreement with the Heat, but considering that reports had Memphis and the Clippers offering him around $5 million for a 1-year deal...it's hard to imagine Iverson would sign with Miami for under $2 million, which would be the most we'd be offering him.