Jekyll and Hyde Heat dominate the Wiz in D.C.

Share All sharing options for: Jekyll and Hyde Heat dominate the Wiz in D.C.

Anybody get the feeling while watching this one that it was just like that Pacers game earlier in the week?  Just total domination from a Miami team that looked head and shoulders better then their opponent.  I guess they felt like playing in D.C.  Maybe being in Super Cool Beas' hometown had the team all jacked up.  Maybe they had a really good pregame meal.  Or maybe, just maybe, whatever Coach Spoelstra had to say after their disastrous loss in Charlotte sank in.  Either way, a win is a win...right?

The game started out with Jermaine O'Neal and Michael Beasley doing most of the scoring for the Heat.  The duo had 12 of the teams first 14 points and combined for 3 rebounds and a block.  A Quentin Richardson triple would spark an 18-2 run from Miami that took them through the end of the 1st quarter.  Up 32-15 after 1 is definitely a great start, but can you really be that confident with the way the Heat has been playing?

With reserves in place, Miami scored the first 4 points of the 2nd quarter before the Wizards finally got back on the board.  It was just 7:41 of game time between Wizards field goals, which consisted of a lot of missed jumpers and bad layups.  The Heat lead peaked at 22 when the Wiz finally made a run, a 13-2 stretch.  Miami answered back and would've led at halftime by 18 if not for a fluke trey by Andray Blatche at the buzzer.

It didn't take Washington long to trim the Heat lead back down to 10 once the 2nd half started, but that turned out to spark the Heat to make another serious run.  After the Wizards got the score to 61-51, Miami outscored them 22-6 and re-claimed the 20+ lead. You always hear that the home team will make a run, and the Heat responded to the 2 runs made by Washington with runs of their own, ultimately controlling the game from start to finish. 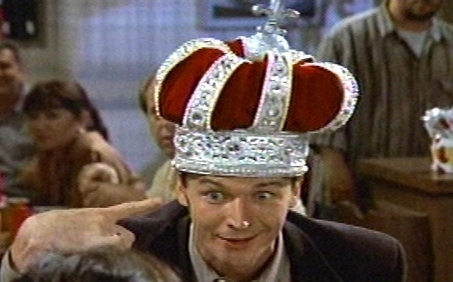 I'm the Wiz and nobody beats me!

4 out of 5 Heat starters finished in double digits (I bet you can't guess who didn't), and Miami beat the Wizards in every single category on my box score sheet here.   Oh wait, no they didn't, Washington shot 1.2% better at the foul line.  Oops, my bad.

The chemistry between Rafer Alston and his teammates is starting to come to fruition.  He made some very pretty passes against the Wiz and finished with 9 assists to go along with his 11 points (3-of-5 from beyond).  He also did a good job containing Randy Foye, who had been one of the hotter players on Washington, but we already knew that Alston was a solid defender.

Next up, the Sac Town Kings come to Miami for a rare home game (just a few over the next couple months). Sacramento isn't one of the better teams in the NBA, but they did just welcome back Kevin Martin...who is pretty darn good. We'll see if the Heat shows up.