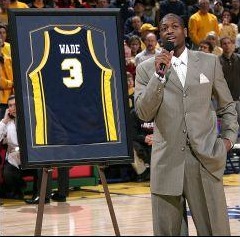 After a most convincing win last night in Detroit, the Heat will now head to the college home of Dwyane Wade for the start of a home-at-home with the Milwaukee Bucks.  Playing in the same arena that he led Marquette to a 30-1 home record during his tenure there will hopefully be a nice boost to Dwyane, although I cant imagine the joy of playing in the Bradley Center will heal Wade's ailing back.

This is the first of four meetings between the teams this season, with the Heat taking last years series 2-1.  By no means is this game a gimme; The Bucks have been playing some very good ball at home lately.  For what its worth, Miami has the best winning percentage in Milwaukee (.615) then any other team.

After a very hot start (see: 55 points on 11/14 vs. Golden State) rookie Brandon Jennings has cooled off significantly.  He's shooting just 39% in his last 10 home games, averaging just 13.1 points.  That's over 12 points less then he averaged in the Bucks first 11 home games.

Tipoff from the Bradley Center is set for 8:30.  The two teams will then take a day off and play again on Monday in Miami.  Go Heat!!