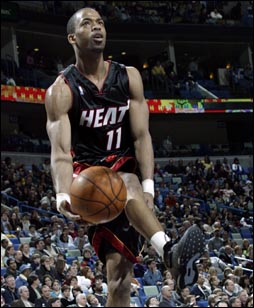 Pat Riley could be on the brink of awesome move #2.  Earlier today the Nets and  Rafer Alston completed a buyout and it seems the Heat are making the room to bring him back to Miami.  The Heat dealt Chris Quinn to the Nets for a future second round pick earlier today, dumping off the rest of the $1.055 million that Quinny is due for this seaosn.  Could the Heat be about to make another move where they get rid of a guy who wears a suit and tie to every game and replace him with an instant rotation player? (See Richardson, Q)

It will be at least another couple days before anything is done, as Alston has to clear the NBA's 48-hour waiver period which begins today.  He was in the final year of a contract that was to pay him $5.3 million this season, but now he'll likely sign for the pro-rated share of the league minimum, which is guaranteed for the rest of the year.  Now nothing is set in stone, as it's also reported that the Cleveland Cavaliers are interested in the services of Alston, but considering how many times Rafer has said he'd love to come back and play in South Florida I'd say his first choice would be to come back to Miami.

Also something to pay attention too, Carlos Arroyo's contract becomes guaranteed on Wednesday.  Could he now be on the way out if the Heat intend to sign a new PG?  I'd say that sounds pretty bloody likely, even though it totally sucks for Arroyo.

Shout out to Kazam92 for his fanshot.

Update: Adrian Wojnarowski is reporting via Twitter that the Heat have indeed signed Alston.   Not sure if he is just speculating or if it can be confirmed, considering the 48-hour waiver period.  They may have already agreed to sign him but cannot actually do it until Thursday.