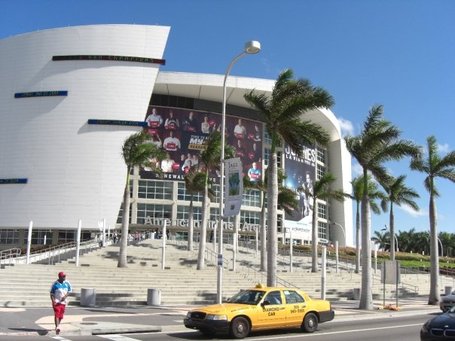 In what should be a crazy scene at the AAA, Miami will kick off the home portion of their season schedule tonight against the Orlando Magic.  Both teams come into the game after getting their first wins of the season.  The Heat rebounded from their rough season opener in Boston with a nice effort in Philly.  Orlando cruised to a win last night over Washington, opening up their new arena with a dominating performance.

It's pretty obvious that the Heat are going to go through ‘growing pains' for a bit.  While that is going on, we're going to see how far their talent on its own is going to get them.  We already got to see how they matched up against Boston, who has been playing together for a while, and now we get to see how they look against Orlando.

A couple of things that stick out to me after two games for the Heat is that Dwyane Wade leads the team in assists with 10 and LeBron James leads the team in turnovers with 17.  While Dwyane is going to get a fair amount of assists, I don't see him leading the team in that stat all season.  I actually expect LeBron to hold that honor, and for the same reason he's been turning the ball over so much.

Erik Spoelstra has shown that he likes James to carry the ball up the floor for the Heat and be the player who runs the offense.  With the team being so out of sync in their first couple games there have been a number of off-target passes from LeBron.  There have also been times where he's turned the ball over when being a little too aggressive, but there are all problems that will be solved in time, once the players get more adapted to one another during games.

My main concern for tonight will be how Miami handles the very potent Magic offense. It seems that no matter what you do, Dwight Howard is going to get his 20+ points and 10+ rebounds.  The key will be trying to stifle the efforts of Rashard Lewis and Jameer Nelson.  The Heat defense has looked lost at times and you better believe that Orlando, who looks like they are in mid-season form, can take advantage.

This game will be broadcast locally on Sun Sports and nationally on ESPN...but if you're like me, you go with the local flavor of Eric Reid, Tony Fiorentino and Jason Jackson over any national crew.  Late tipoff comes at 8pm and if you are attending the game, definitely get there early.

There is going to be a lot of traffic due to a protest going on downtown which starts around 630.  I'm planning on getting there by 6 for a pre-game meal and to hopefully avoid much of the traffic.  Let's go Heat!!