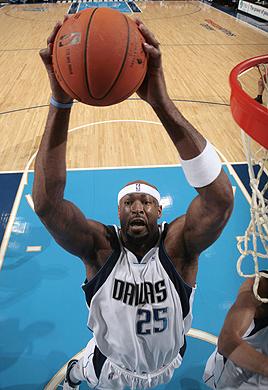 The Sun-Sentinel is reporting that the Heat have waived (or in the process of waiving) Jerry Stackhouse to make room for Erick Dampier. Everyone knows that we need interior help badly and hopefully Dampier will add that. Hes above average in rebounding on both sides of the floor and will give the Heat a little more in a position were sorely lacking. Personally, im just happy were letting go of Stackhouse instead of Pittman. I know it leaves us a little thin on the perimiter, but i hate giving up on a young guy who never had a chance (I still am upset about De'Sean Butler, but thats another story).

This season has started off rockier than any of us could imagine, but to all the real Heat fans out there who have dealt with the 15 win season and many other dissapointments we just have to hold out hope that this will fix itself. Riley has always said this team is not a finished product by any means, and i have all the faith in the world in him. No one swings for the home-run more than he does. I have said numerous times that i dont believe this team will hit its stride until after the all-star break, and now with the injury to Haslem that is even more evident. Be patient Heat fans, thats all we can ask for. Lets not knee jerk like many in our fan base is known for.

Here is the story if you want a direct link: http://www.sun-sentinel.com/sports/miami-heat/sfl-miami-heat-jerry-stackhouse-s112310,0,6667549.story