The Heat doesn't get much time to relax after their 4-game road trip.  They get right back at it tonight when the New Orleans Hornets come to Miami looking to end the Heat's impressive win streak.  Both teams were very different the first time they met this season.  The Hornets were in the midst of an 8-0 start to the season while Miami was stumbling out of the gate.

One of the early season issues for the Heat was the inability to deal with the better point guards in the league, and tonight will be another great test to see how well they are adjusting.  If Miami can contain Chris Paul and limit his production then there is a very good chance the streak will hit 9.

Miami lost by just 3 points the first time these teams met back in early November, thanks to big games from Paul and Emeka Okafor.  The Hornets center hit 12-of-13 for 26 points and 13 boards while CP3 finished with 13 points and 19 assists.  That was a fairly common occurrence during the Heat's 9-8 start to the season as they gave up over 20 assists per game, though they were usually spread out through the team and not just from one guy.

Tipoff from the AAA is set for 7:30.  If you want to go to the game but don't have tickets, don't forget about Peninsula Is Mightier's new partnership with TiqIQ that not only helps you get tickets right here on PIM but they also search through several ticket selling websites and finds you the best deals out there.  Click here to see what's available. 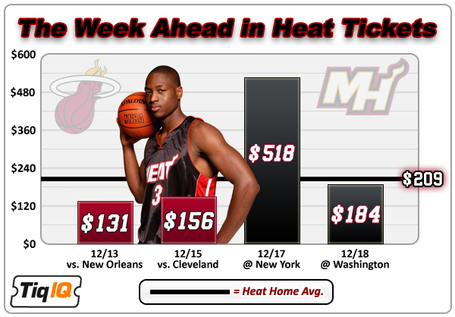