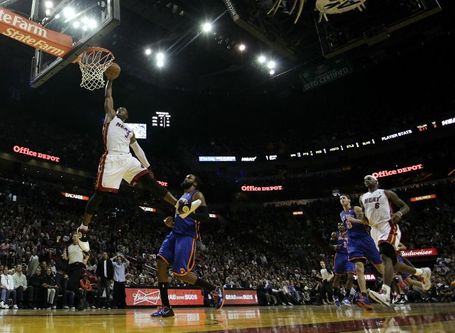 The Miami Heat defeated the New York Knicks for the 2nd time in as many weeks last night at the AAA, enduring an impressive comeback attempt by the Knickerbockers to come away with their 15th win in 16 games.  The Heat's House was packed to the brim with people taking up the standing room only areas all the way on top of the 400 level balconies, and that place was louder then I've heard in a long long time towards the end of the game, especially when the Knicks were on the charity stripe.

This game saw the two teams come out pretty evenly, but that only lasted for about half the 1st quarter.  Miami outscored the Knicks 19-5 over the last 5:30 of the quarter, turning a slim 15-13 lead into a 34-19 advantage heading into the 2nd.  A big reason for the Heat's early success was due to Zydrunas Ilgauskas.  Big Z finished the quarter with 12 points and 9 rebounds in just 9 minutes.

Despite his early success, Z would play just 14 minutes last night.  He may have been a little slow while guarding Amare Stoudemire, but when Ilgauskas was on the floor he was outplaying Amare by far.  Z was really active in the paint, getting several offensive rebounds and easy putback buckets.  He would end up finishing with 14 points and 10 boards, 5 of which came on the offensive glass.

The Knicks would spend the 2nd and 3rd quarters keeping pace with Miami, not allowing the Heat to expand their lead.  That would be big because New York made a furious comeback in the 4th after starting the quarter trailing by 15.  They kept chipping away at the Heat lead until they finally drew within 3 points with 2:01 left in the game.

That would be as close as the Knicks would get though.  Dwyane Wade came right back and drilled a big 3-pointer, sparking Miami on a 9-2 run to close out New York.  I think the Knicks last chance was right after Wade hit the trey when Landry Fields was fouled while taking a 3-pointer.  The call itself was weird because it appeared that Wade took the ball right out of Landry's hands and was actually standing there holding the ball when the foul was called.

Luckily for the Heat, Landry would hit just one of the 3 free throws that would have put New York right back in a one possession game.   Instead, the Heat continued to pull away and came up with another win, their 24th on the season.  New York meanwhile has now lost 4 of their last 6 games, though after the game when I spoke with coach Mike D'Antoini and Amare Stoudemire, both felt that the Knicks were moving in the right direction so perhaps the bad stretch could end up as a preface for another nice winning streak for them.

Dwyane Wade put up a season-high for points for any Heat player this season, scoring 40 points, 15 of which came in the final 8½ minutes of the game.   He did have the big triple at the end of the game but the main reason for his success was that Wade was attacking the rim all game.  He shot 13-of-16 from the charity stripe, and anytime D-Wade gets to the foul like 16 times in a game odds are he's going to have a good night.

It's a quick turnaround for Erik Spoelstra's club.  They flew to Houston immediately following the game last night and will play the Rockets tonight at 8:30.