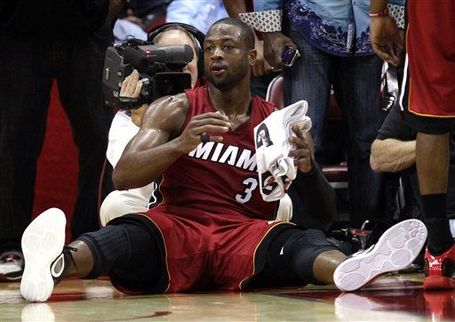 There were a lot of reasons why we knew that this game between the Heat and Rockets wasn't going to be an easy one for Miami.  They were playing the 2nd night of a back-to-back against a team in Houston that has been playing their best ball of the season.  As well as they have been playing, the Rockets have been even better on their home floor.

This one started out well for Miami but as time went by you could sense that something was off.  The Heat was scoring just fine but their defense was having a very hard time dealing with the Rockets offense.  Miami's offense was just fine early on, and they put up a 35-point 1st quarter a night after dropping 34 in the 1st against the Knicks.

Unfortunately for the Heat, they couldn't sustain that offense throughout the entire first half.  As their offense began to struggle, Miami's defense was slipping as well.  Houston came right back on the Heat with a combination of outside shooting and scoring in the paint. The Rockets were led mostly by their bench, who outscored the Heat's reserves 28-6 in the 1st half and had Miami trailing 62-59 at the break.

That's right, Houston dropped 62 points on Miami in that 1st half.  The Heat still managed to shoot 55% and held the Rockets to 44%, but a 7 rebound and 5 assist advantage for the Rockets was a major contributing factor, as was their dominant bench play.

In the 3rd quarter Houston seemed to pick up right where they left off, looking very fluid and comfortable on offense.  About 5 minutes in the Rockets had stretched their lead to 9, their largest of the game.  That's when the Heat D finally started to pick up, and we all know from watching Miami all season...when the defense gets going so does the offense.

The Heat began chipping away at Houston's lead while getting stops on the defensive end.  With 2 minutes left in the 3rd quarter LeBron tied the game at 82 with a nice 18-foot jumper, then on Miami's next trip down the court James Jones put the Heat up by 3 with his first triple of the night.  The Heat would end up closing the quarter on a 22-10 run, taking a 4-point lead into the final quarter.

Aaron Brooks made a big mistake a couple minutes into the 4th.  Dwyane Wade was on a fast break about to dunk the ball when Brooks came around with trying to foul Wade and wacked him right in the face.  Dwyane stayed on the ground for a minute but he was ok, just had to get his freshly busted lip bandaged up during the timeout.

I don't know when teams will learn not to upset Dwyane Wade but the Rockets now had to learn that the hard way thanks to Aaron Brooks.  The score was 92-89 Miami and Wade had 30 points when this took place.  5 minutes of basketball later the Heat held a 115-105 lead and D-Wade had 43 points.

You have to give credit to the Rockets for not closing up shop at that point. Instead, they went on a 9-0 run that saw them trailing by just 3 points with 57 seconds left.  That's when Joel Anthony would put his stamp on this game.  He collected 2 huge rebounds, was fouled after each, and hit all 4 free throws to seal the win for Miami.

Miami ended up shooting 58% from the field and made 34-of-37 from the foul line (91.9%).  This was really an all-around good effort from the entire team.  Carlos Arroyo hit both of his 3-point attempts, Joel Anthony and D-Wade led the team with 7 rebounds while LeBron James had a team-high 9 assists.

I have to admit I had a lot of fun watching this game. Can you believe that just over a month ago the Heat were 9-8??  Since that loss in Dallas, Miami has won 16 of 17 and now find themselves just 1 game back of Boston for the #1 seed in the Eastern Conference.

The Heat is off until New Years Day when they host Dorell Wright and the Golden State Warriors.  We'll get to that one in a bit...for now I just want to sit back and enjoy this win and the feeling of my team being the next NBA dynasty.

For more info on the Heat's history making night, check out this video.  Thanks to our boy SNOOP97DAWG for putting it online for us.