Looking ahead: The uncertainty of Michael Beasley and his future with the Heat

Share All sharing options for: Looking ahead: The uncertainty of Michael Beasley and his future with the Heat 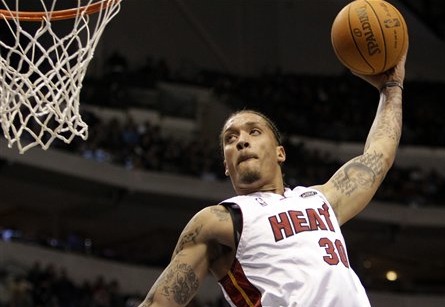 Now that the offseason is upon us, there are tons of questions to be answered and topics to be discussed.  We'll be touching on as much as we can in the coming weeks, and as we get closer to July 1st I'm sure the number of topics and rumors will grow and grow.  I couldn't decide on what to make this first post about, so instead of just randomly picking something off of my list I looked around the internet to see what the hot topic was when talking about the Heat (other then Dwyane Wade).

Imagine my surprise to see that Michael Beasley was getting attention left and right, especially from the South Florida media.  There are so many different subjects and angles when discussing Beasley at this time because it goes beyond just talking about his season.  But whatever topic that gets attention, it all comes back to the same question: What is Beasley's role in the future of this franchise?

One thing that must be kept in mind is Beasley's desire to be a #1 scoring option, which he had been on pretty much every team he'd played for until arriving in Miami.  I'm willing to bet that the combination of Beasley's frustration due to having to defer to D-Wade and playing in an offensive system that forces him to think before he acts instead of just going on instinct are big parts of why he struggled so much this year.

I'm sure he figured that after winning the starting power forward job before the season began that he would become an elite, all-star caliber player in the NBA.  I say that because last year, his rookie season, he honestly thought that he could be a candidate for MVP...so obviously he thinks quite highly of his basketball talent.  And why shouldn't he?  He's probably dominated every level of ball that he has played in, so combine that with his ‘not so smart-ness' and its easy to see why he gets so frustrated with his lack of success.

Statistically, his regular season numbers from this year were pretty similar to those of his rookie season.  He improved his scoring from 13.9 last year to 14.8 this year, his free throw shooting from 77.2% to 80.0%, he grabbed a full rebound more per game this year (from 5.4 to 6.4) and his steals improved from 0.51 to 1.0.  No drastic improvements or declines...until you start looking at his playoff numbers.

Alright, that's enough stats.  Getting back to his future, it's really up in the air at this point.  With Erik Spoelstra coaching, Beasley will have to continue to work in a system that has him playing in a pick-n-roll instead of creating for himself, as well as worrying about his defensive assignments, because that is a very important part of the game when you play for the Heat.

Spoelstra has come right out and said that Beasley should be able to handle whatever role assigned to him if/when the Heat bring in a stud player at his position.  But that wouldn't make Michael very happy.  He already has a hard time playing without the ball and having to be productive when playing off of his teammates instead of it being the other way around.

I can't see how moving to the bench would be helpful to Beas because that would require him to be mentally tough, learning how to play his game while coming off the bench in relief of a Bosh, Amare or Boozer.  One solution would be to have Beasley move to the 3 again, but I am very much against that.  He was drafted because he'd been playing a certain position a certain way and doing a damn good job at that.

Since coming to the NBA though, he has had to change and adapt his playing style, role and position...and we all know how the results have turned out.  If he was on a team where he had complete freedom to do what he wanted, I'm sure he'd be averaging close to 20 points/game.

Unfortunately, that isn't how the Heat operate and judging by the free agents available and what Pat Riley wants to do when building his new dynasty (we hope), Beasley is going to have to figure out how to succeed in this system or we're going to see more of what we saw during Game 5 of the Celtics series...an unproductive, unhappy youngster sitting on the bench.

Since then, Beasley hasn't made himself available to speak to any members of the press.  I cant even imagine what he must be thinking, though I'm sure he is aware of the same things that we fans are all aware of regarding the prospect of Pat Riley bringing in some all-star caliber frontcourt free agents.  For a guy who craves being in the role of ‘#1 option', those hopes are far from happening on this team.

So looking ahead, as I said earlier, things are very much up in the air.  As of now, the bottom line is this: Beasley is signed up for next season at the rate of $5 million with the team holding an option for the 2011-12 year.  That means the Heat could simply look to trade him to free up cap space, but as long as the kid is willing to work I can see Riley and Spo hanging on to him for at least another year to see how much he develops.  For now we'll just have to play the waiting game...