Lennon & McCartney: When two of the best became the greatest ever by joining forces

Share All sharing options for: Lennon & McCartney: When two of the best became the greatest ever by joining forces 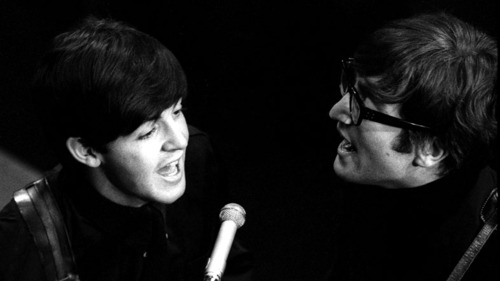 "Do James and Wade, two of the league's three biggest stars, want to share the spotlight? Winning titles in Miami would perhaps open James up to arguments that he couldn't win a ring without Wade." - Chris Broussard

"The only plausible scenario is in Miami where the Heat could keep Wade and, with a few moves, have enough space to grab LeBron and Bosh if the three took small pay cuts. But you have to ask yourself ... would it be a challenge to them. It's one thing to win, but players want to be challenged too. As long as Miami stayed healthy, they'd steamroll people. I think the chances of two of them hooking up in Chicago or NY are much more likely." - Chad Ford

This summer marks 50 years since the Beatles started their journey to the top of the charts and by the end of their careers together a decade later had swiftly become the greatest and most successful band ever. Critically and commercially there is no comparison with any other band during their time together and long after they went their separate ways. Their profound impact on culture, music, and style continue to reverberate to this day. And they were led by two of the best musicians ever who formed a partnership that would forever change history and transcend anything they could have done separately. Could it happen now all these years later with an all-new Fab Four in the American Airlines Arena?

Paul McCartney and John Lennon’s partnership wasn’t always perfect and they grew apart after several years of being on top of the world but the legacy they left behind for the years they did work together is unparalleled. They made each other better through friendly competition, support and shared respect that produced mutually beneficial results. They made sacrifices (Paul switched to bass so George and John could continue on guitar) and compromises for the greater good. It’s the true essence of teamwork, irrespective of whether it’s music or sports. Whether it was in rehearsal or on stage in front of thousands of adoring fans the Beatles became the greatest ever together without worrying about who the front man of the group was or whether it was actually Lennon or McCartney who wrote each song (it was simply credited to Lennon-McCartney for their whole Beatles career). 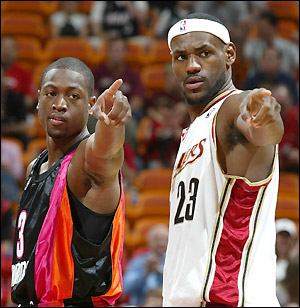 Although the comparisons aren’t always perfect (the Beatles formed before they were signed, Wade and Lebron are already established stars), NBA experts continue to be fixated on arguing whether the potential duo could "work" together because they need the ball or because they’re superstars instead of the positives of having a partner on your side who is your equal. It’s an argument that still confuses me to this day. What’s the problem of sharing the spotlight when the spotlight is focusing on the raised floor at half-court with a goofily grinning David Stern handing over the Larry O’Brien trophy to Wade and James every year?

When listening to one of the Beatles' superb LP’s like Revolver, no one is ever questioning whether Lennon could have done it better alone or if McCartney is getting bored churning out another masterpiece with the other three. My enjoyment of McCartney’s "Eleanor Rigby" isn’t undercut by the subsequent Lennon song "I’m Only Sleeping" in spite of their wildly different lyrical and musical styles. Heck, George Harrison has the first track on the album ("Taxman") and Ringo sings on possibly the most famous song ("Yellow Submarine"). Only the best material was used from the three songwriters in the band and expanded upon inside the studio. The end result for all that hard work and dedication? Zero criticism from anyone about why these four lads from Liverpool couldn’t be #1 in the charts on their own (or with different groups with lesser bandmates).

Why isn’t this possible in the NBA? LeBron James is already considered one of the most unique and gifted players of all time and the nearly unanimous praise has come despite his greatest "failure" yet, not having won a ring yet. Sure he’s been stuck playing with Larry Hughes, Ben Wallace and Drew Gooden at times in his career in Cleveland but what was thought of as deep squads the last few years have failed to give James enough support for that elusive championship. But how will he reach the zenith of the basketball world without several rings, let alone one or two in his career? When it’s all said and done on his career does he want to be compared with Michael Jordan (6 rings), Magic Johnson (5 rings), Kareem Abdul Jabbar (6 rings) and Bill Russell (an astounding 11 rings) or does he want to join the company of Karl Malone, Charles Barkley, Elgin Baylor and Patrick Ewing? Whether he stays home or bolts for the Bulls or Knicks, none of these three teams can promise him a potential dynasty.

I can see James staying home and possibly being eventually rewarded with his loyalty with a ring or two if owner Dan Gilbert and GM Danny Ferry continue to tinker with the roster and finally put together a solid playoff team around him. Even the most optimistic Bulls beat writer would be hard pressed to explain how a dynasty would happen with the upgrades from Mo Williams to Derrick Rose and Anderson Varajeo to Joakim Noah and a few other complimentary pieces in Kirk Hinrich and Taj Gibson. New York? As nice of a shooter as Danilo Gallinari is he probably gives up more points on defense than he scores for his team. And I don’t think the team learning from Mike D’Antoni is going to change matters much on that front. Miami? Ah, the only apparent drawback seems to be winning too much.

I’m going to go out on a limb and theorize that those players on those Boston Celtics teams from 1957 to 1969 weren’t particularly bored and were quite happy to share this supposed "dreaded" spotlight en route to 11 championships in those 13 years (that are ironically the same years that the Beatles were together). Similarly, I don’t think anybody was minimizing Larry Bird or Magic Johnson’s accomplishments in the 80’s when they were playing with stacked teams. Someone else needs to pick the second banana out of the championship duo of David Robinson and Tim Duncan because I can’t. And wouldn’t you know it, they both worked in the low post and yet somehow managed to figure out how to mesh together. What a concept! With Lennon/LeBron and McCartney/Wade leading the way it’s easy to plug in the rest of the winning formula. Harrison could be either Chris Bosh or Amaré Stoudemire. Ringo would be a point guard who can provide a steady backbeat for the other three. The fifth Beatle was thought to be their classically trained producer George Martin whose slicked back hair is eerily similar to Pat Riley.

LeBron may be young but time is running out to catch up to the other legends of the game. It’s time to make beautiful music together with Wade.