Though the Miami Heat have several picks in the upcoming NBA Draft, it's important to remember they have two second round picks from last year's draft that have been busy gaining international experience in Greece that may be ready to contribute. Miami acquired the draft rights to Patrick Beverley, selected with the 42nd pick in the 2009 NBA Draft, from the Los Angeles Lakers in exchange for a 2011 second round draft pick and $1.5 million cash. The former Arkansas standout had actually played in the Ukrainian League the year before after two seasons with the Razorbacks where he had to leave after being caught cheating. Beverley signed on with Euro powerhouse Olympiacos last year after working with the Heat all summer.

Miami also selected Robert Dozier with the 60th (& last pick) in that draft and the former Memphis starter was a key piece along with future NBA players Derrick Rose, Chris Douglas-Roberts and Joey Dorsey in the Tigers run to the 2008 NCAA championship game in a loss to the Kansas Jayhawks (with Mario Chalmers). Dozier also ended up in Greece after the summer to play for Colossus Rhodes BC. Lamentably, the Heat also agreed to draft Marcus Thornton for the New Orleans Hornets with the 43rd pick for two future second round picks (this year and 2012).

Os Davis from Balling In Europe, our source for all things Euro at the ESPN Truehoop Network, was kind enough to help out with a scouting report on both young prospects and whether or not they have a shot to contribute for the Heat after playing in the Summer League with so many final roster spots for the taking. 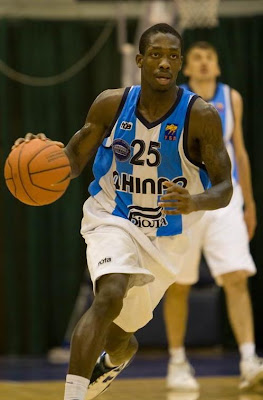 Have you seen him play much in 2009-10: Yes and no. I must have seen almost 30 Olympiacos games this season, but Beverley really didn’t get too much playing time this season, stuck behind long-time veteran Theo Papaloukas, Euroleague MVP Milos Teodosic and even the highly-regarded (if mostly for his defense) Scoonie Penn. You can see from the stats that Beverley actually got consistently fewer minutes as the season went on, but this pretty common in European basketball, as the rotations get shorter and shorter throughout the season as the national cups, Euroleague, and national leagues all culminate at different parts in the season’s second half. http://www.euroleague.net/competition/players/showplayer?clubcode=OLY&pcode=001927&seasoncode=e2009 Notes, thoughts, opinions: Having said this, Beverley did tend to make the most out of his limited time this season with great shot selection and good free throw shooting (82%). He’s got the typical young-man-in-Europe problem, i.e. never a pass, always the mad dash to the hoop – he may yet learn how to pass. On defense, I’m impressed. Only the very quickest in Europe and almost nobody in Greece can consistently beat this guy off the dribble and he really prevents the drive to the hoop in a halfcourt offense. Chance for NBA career: Hard to tell. I figure the next couple of years are crucial: He needs to find a team to give him more quality minutes if he is to take that next step in development. Perhaps he might leave Olympiacos to be a bigger fish in a smaller pond. Like, for example, Colossus Rhodes BC... YouTube bonus: Here’s Beverley getting a rare (let’s face it, his only) moment on the Euroleague highlight clip...

Have you seen him play much in 2009-10: Not really. Since Rhodes wasn’t in any of the pan-European leagues this season, I only saw these guys three or four times this season, including both the playoff games against Maroussi BC. But... Notes, thoughts, opinions: ...whoa, pretty impressive was what I did see. His pretty damn good stats (9.0 ppg/6.4 rpg) belie his excellent "basketball IQ" out there – in terms of mentality, this guy could be an NBA player next season. At least in the regular season, Dozier was a steady presence on both ends of the floor. On the other hand, he shot nervously in the playoff games despite getting the same spots in the post he’d been getting all season – hopefully this was a case of the one-off, first-time jitters for him because it was certainly not typical of a very cool player in the Greek League games. Chance for NBA career: Sure, why not? Though I’d guess he’ll definitely stay one more year in Europe: He’s a starter getting 26-27 minutes a game, three times the playing time of Beverley! I sure wouldn’t be surprised to see him suiting up for Miami (and hopefully up to, say, 240 pounds) in 2011-12. YouTube bonus: None! Sheesh, talk about your small-market teams.