Heat meet with Amare and Chris Bosh; lots more to talk about after day one of free agency

Share All sharing options for: Heat meet with Amare and Chris Bosh; lots more to talk about after day one of free agency 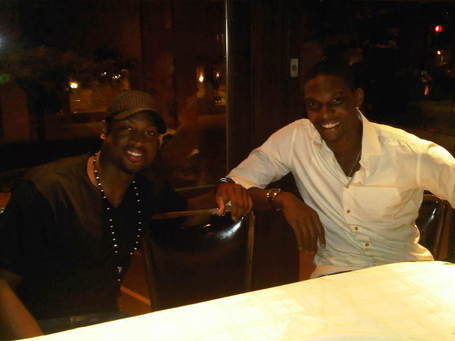 Chris Bosh sent out this picture of he and D-Wade having dinner early Friday morning via his Twitter page.

After the first full day of free agency, I wanted to put together a little something about all the stuff that went down.  This is not going to be an everyday thing, but considering all the interest and speculation going on, I might as well throw in my two cents.  The Heat was just as active on Thursday as any of the other teams with money to throw around, meeting with Chris Bosh and Amare Stoudemire on different ends of the country.

The Heat recruitment group of Pat Riley, Micky Arison, Erik Spoelstra and Alonzo Mourning has been on the move since late Wednesday night.  First they went to L.A. to meet with Amare Stoudemire shortly after midnight on Thursday.  Then (after getting some sleep, I imagine) they headed back east to meet with Chris Bosh in Chicago on Thursday night.

Along with the Heat, Bosh met with the representatives from the Nets as well on Thursday and plans to meet with the Knicks and Bulls on Friday.  Thanks to his Twitter account, Bosh has been keeping us posted on what he's been up to.  Without posting them all, here are a few of his tweets:

@chrisbosh-Off to a great start. First one went well. Pat Riley is very passionate about winning

@chrisbosh- Just said what's up to @dwadeofficial as I was heading out. Good to see a fellow free agent going through the same process.

@chrisbosh- Headed to the next meeting. Time to hear what the Nets have to offer...

@chrisbosh- New Jersey meeting was very good as well. These guys really know how to sell a franchise

@chrisbosh- Just had dinner w @dwadeofficial. Great way to end day 1 of #freeagency although it feels like someone is missing......

I wonder who he was talking about that was ‘missing' from their dinner.  Could it be...LeBron James, who met with the Knicks and Nets in Cleveland on Thursday and plans to meet with Heat and Clippers on Friday and the Cavs and Bulls on Saturday

Speaking of @dwadeofficial (that's Dwyane Wade's Twitter page for those who don't know), he hadn't sent out any tweets in almost 7 days before ‘breaking his twitter silence' (as he put it) and sending out this message around 2am on Friday:

@dwadeofficial- You only get one july 1st. Had a blast but glad the first day has came and went. Gotta get some rest 2morrows another big day.

Does that matter or even merit being reported?  Nah.  Who wouldn't enjoy people meeting with you with the sole purpose of kissing your ass and throwing ridiculous amounts of money at you?  Still though, its nice to know his spirits are high and that he is getting the most out of his meetings with non-Heat teams because it's the last time he's going to be talking to any of them about jobs for a long long time.

Moving on...a guy that I like that nobody else seems to, New York Knicks free agent forward David Lee plans to meet with the Bulls, Heat and Timberwolves over the next three days.  I'll take all the grief that it entails, but I've seen him play enough to know that I like what I see.  Now to the rest of the big stories from July 1st...

Darko Milicic- 4-years $20 mil with Minnesota.  I guess they really like Darko and still consider him to have a ginormous upside.  Obviously there is still some hype surrounding the guy drafted 2nd overall, ahead of pick #3 Carmelo Anthony, 4th overall Chris Bosh and the 5th pick, Mr. Dwyane Wade.

After being drafted by Detroit he bounced around to four different teams over 7 years. He played for his 4th team, the New York Knicks, for just a couple months before expressing his plans to leave the NBA and pursue a professional career back in Europe last December.  He was moved to Minnesota in February, and who would've thought that the Timberwolves would be the team that seemingly brought Milicic back from the dead.

Rudy Gay- 5-years $80 million.  Really?  I know this kid is good but the money being tossed around is getting pretty insane.  Here is the low-down on the Gay deal.  He's set to make a little more then $13 million in 2010-11 with his salary increasing annually by 10.5%.  I'd say he's done pretty well considering he turned down a 5-year $50 million offer last season.

Channing Frye- The Phoenix Suns reached an agreement with forward Channing Frye on a five-year, $30 million contract.   Frye is capitalizing on a great year with the suns where he averaged over 11 points a game while shooing 44% from downtown.  $6 mil a year sounds about right for this crazy NBA.

Amir Johnson- Amir Johnson has reached agreement on a five-year, $34 million contract to return to the Toronto Raptors.  The 23-year old put up pretty blah stats, 6.2 points and 4.8 boards, but played in all 82 games and is another guy who you have to assume has convinced his team he has a very tall ceiling.

Joe Johnson The Atlanta Hawks offered Joe Johnson a six-year, $119 million contract Thursday, and in a shocking revelation, sources close to Johnson say that he's likely to take the deal.  There is no way he gets offered anything like this anywhere else, so the question will be how much money is he willing to give up in order to play somewhere that he has a chance of getting out of the 2nd round?

Teams in the East are already better then Atlanta and they are only getting better.  The Bulls, Nets and of course the Heat are all going to vastly improve, and I'm going out on a limb and saying that the Nets will compete for a playoff spot next season.  That's right...I said it, and I mean it.

We'll see what happens as the next few days unfold, and my guess is that by early next week we'll have a much better idea of who will end up playing in Heat jerseys next season. As for some of these signings...they are all by teams who aren't in a position to be big players in the free agent game. That being the case, my guess is that they are trying to do as much possible with the players they feel they have the best chance of locking up long term.  While I still think these guys are getting grossly overpaid, I cant fault the teams for trying to keep some kind of stardom in their respective buildings.

When all the attention is on guys like LeBron, Chris Bosh and Amare Stoudemire and teams like the Heat, Bulls, Nets and Knicks I completely understand these less popular teams trying to lock up what they feel are the best available players that are willing to sign with them.  Keep that in mind and appreciate the amazing position our Miami Heat are in and how lucky we all are that whatever Pat Riley ends up doing for our team will be pretty amazing and will put us in a position to be NBA Finals contenders for years to come.