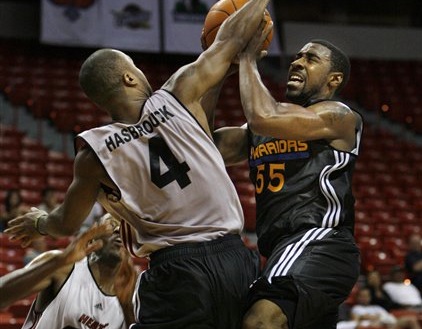 For the time being, the Heat's coveted final roster spots are all taken.  Earlier today the Heat announced they had re-signed guard Kenny Hasbrouck to a non-guaranteed deal.  Just like with Shavlik Randolph, Hasbrouck will have to earn his way onto the roster during training camp and the preseason.

Hasbrouck has a good chance of making the final cut due to the Heat's lack of depth at guard.  Only Dwyane Wade, Mike Miller, Mario Chalmers and Carlos Arroyo are the true guards on Miami's roster.  Randolph will have a tougher time because between center and power forward, there are seven guys signed up and ready to go.

Playing for the NBA D-League Champion Rio Grande Valley Vipers last season, Hasbrouck averaged 16.9 points on 50.4% shooting, 2.4 rebounds 2.9 assists and 1.6 steals.  That got the Heat's attention, who signed him to a pair of 10-day contracts before officially signing him for the rest of the season.

He also did a very good job for Miami during the Summer League, starting all 5 games and averaging 28:32 of playing time.  He averaged 13.6 points, 2.4 rebounds and 2.4 assists while shooting 49% from the field and 45% from downtown.

All of those are very impressive numbers and it will be great if they translate to the NBA, even for a guy sitting at the end of the bench.  Just knowing we have someone capable of handling things during garbage time and in case of an emergency is a nice thought to keep in the back of your head.

DIRK WANTED TO COME TO HEAT?

During an interview with a German basketball magazine, Dirk Nowitzki said that while he never planned on leaving the Dallas Mavericks, he would have given some serious consideration to playing with the Heat.  That is, only if LeBron James and/or Dwyane Wade had requested for him to come here.

With Chris Bosh on the team and making it no secret that he didn't want to play center, there was no real reason for the Heat to consider Dirk.  Already with plenty of superstars on their roster, Miami would have had to use every penny of their remaining money to sign Nowitzki, and even that may not have enough (depending on how much less he may have taken to play here)

JAY-Z IS NOT HAPPY WITH LEBRON

The close friendship between Jay-Z and LeBron James is not in great shape right now.  It isn't as much about James' choosing to play for the Heat instead of signing with the New Jersey Nets, the team that Jay-Z is a partial owner of.  It's more about the way LeBron acted towards hip-hop superstar in the days leading up to his decision.

James' didn't take any of Jay-Z's phone calls in the days leading up to his announcement.  A source also told the New York Daily News that Jay-Z is "pissed, or at least disappointed, that LeBron didn't consult with him."

I'm pretty sure that in his final days as a free agent LeBron didn't consult with anyone (except his mother) and that he certainly wasn't speaking with any of the teams that he was considering signing with.  I guess Jay-Z thinks that he should have gotten some kind of ‘special treatment' because they are friends, but that obviously was not gonna happen.

Finally, speaking of LeBron James, a fan wearing a Miami Heat LeBron jersey was escorted out of Cleveland's Progressive Field during the Indians 8-0 loss to the New York Yankees on Wednesday night.

The fan was sitting in the left field bleachers and heckling the rest of the Indians fans, pretty much asking to get his ass kicked.  After getting bad words and beers thrown at him, police officers finally showed up to remove fan in the midst of a "throw him out" chant.

The guy was obviously an idiot.  What caught my eye though was when I read that he was at the game with his girlfriend.  If you show up to a Cleveland game and do what he did, you have got to know that somebody will probably try to fight you or at least (as was the case) throw food and drinks at you.  Why the hell would any man in his right mind subject his girl to that kind of treatment?

There is a great picture of the fan getting escorted out and still showing off his Heat jersey, but unfortunately I cant post it because it isn't owned by anyone that SB Nation has an affiliation with.  It was SNOOP97DAWG that showed me the picture, so maybe he'll post it in the comments section for you all to see.

He also showed me a video yesterday that I'm going to share with you.  Our boy Carlos Arroyo has been playing all summer with the Puerto Rican National team, and during a game against Mexico on Sunday the guard lost his temper a little.  Watch the clip and see for yourself what I mean...