Dwyane Wade is coming home, but will it be to stay?

Share All sharing options for: Dwyane Wade is coming home, but will it be to stay? 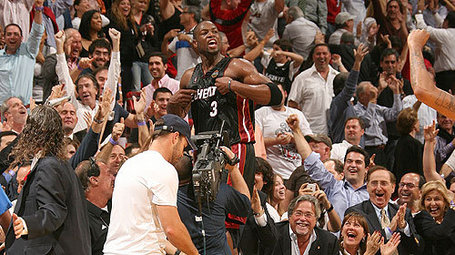 As the holiday weekend draws to a close, the Heat are probably exactly where they expected to be at this point. Maybe even where they hoped to be. It's July 5th, which means that players have been able to meet with whichever teams they pleased for almost a week. Some have already heard enough and agreed to sign pretty nice contracts. However, the ones that have not made their choices yet are the ones on the top of the Pat Riley's ‘want list'.

Lets look at the facts. The Heat has had meetings with seven big name free agents in a 3-day span. Two of those guys have been crossed off the list; Amare Stoudemire and Joe Johnson. Johnson already agreed to re-up with Atlanta for a ridiculous $120 million over 6 years, and it appears that Amare is going to sign with the Knicks for $100 million over 5 years.

Dwyane Wade seems to have narrowed his choice down to Chicago, who he's met with twice, and Miami. He hasn't yet met with Riley and Co., and will return to Miami today and meet with the Heat crew probably on Tuesday.

LeBron has met with the Knicks, Bulls, Heat, Nets and Cavs and Bosh has followed suit, but none of the three guys have shown themselves leaning in any way. Well, other then Dwyane who its pretty obvious that his choice is between Chicago and Miami. One thing to keep in mind is that the three powerhouses plan to meet together at least one more time before any of them make a decision.

With Wade returning to Miami, where he is likely to make his decision, could that meeting be held down here? With Pat Riley and the Heat? Considering that Wade and Bosh met together with the Bulls a couple nights ago (along with their agent Henry Thomas, who they share) I would say that is not only possible but also likely.

I'm just laying this out for you because that is how it seems to be playing out. I still say it's a long shot at best due to the magnitude and enormity of what these kind of moves would entail. That doesn't mean history isn't out there to be made, but with things like this that never happen in sports, they are never going to be thought of as something that could come easy.

If it doesn't happen, there are still very good backup plans in place. Brendan Haywood, David Lee, Mike Miller and several other free agents could still fill out a very formidable roster assuming the Heat are still able to sign Wade and possibly/probably Chris Bosh. And I do think there is a very good chance that those two are going to sign together somewhere.

Dwyane Wade I feel is the core of the three. The rock. The leader of the pack, even if LeBron gets all the public attention. Wade is the only one of the three to show stability and consistent leadership qualities throughout his career. Oh, and there is also the championship that he won back in 2006.

The Heat is holding a significant advantage in meeting with Wade after he has done with all his other meetings. Right now, the Bulls are right up there in D-Wade's mind. As they should be. But remember, Wade wants to stay in Miami. That hasn't changed, even if there is a new place he is thinking about. When he returns down here and immediately is hit with all the love that Miami-Wade County will shower him with, that's just the start. That just gets him back to feeling at home and in a safe place surrounded by love.

Then comes in Pat Riley, who I'm 100% certain has an amazing, kick-ass presentation lined up for Dwyane that will remind him all the reasons he loves it down here and why he has said over and over that he wants to stay with the Heat. Add into that equation that Riley has already spoken to every other free agent Miami could sign. All the options will be right there for D-Wade.

So yeah...right now it seems like he's in a Chicago state of mind. Give that a day or two. The guy just needs a refresher course on why he loves it so much down here. He has been bombarded with every reason to leave for the last several days, ways that make it amazingly easy for him to move out of here and never look back. Now it's our turn to get him right back on track, and I'm very confident that is exactly what's going to happen.