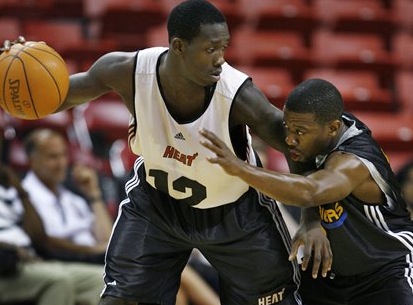 Earlier today the Heat announced they had signed 2009 2nd round pick Patrick Beverly to a 2-year deal.  He'll be making the league minimum and the contract will be in the ‘unguaranteed' realm of fellow training camp hopefuls Shavlik Randolph and Kenny Hasbrouck.

Beverly is known more for his defense then his offense, which is probably why his stats from last months Summer League aren't as impressive as Hasbrouck, who the Heat signed last week.  Beverly averaged 5.8 points on just 35% shooting, but he still managed 4.8 rebounds, 1.8 assists and 2.2 steals in just under 25 minutes a game.

Over the last two years Beverly has done pretty well in Europe, especially last season while playing for powerhouse Olympiakos.  He averaged 4.9 points on 58% shooting, 2.8 rebounds and 1.6 assists off the bench.

Thanks to Keebler for his FanPost...the first of many to come this season I'm sure.