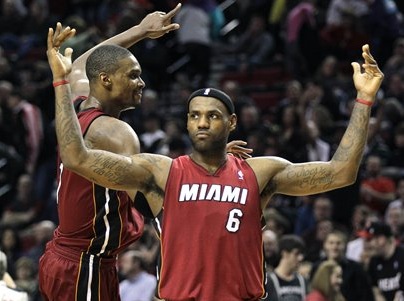 Earlier today the NBA announced that LeBron James was the Eastern Conference Player of the Week for the period of January 3rd-9th.  This is the 2nd time that James has won the award this season and the third week in a row that the winner has come from Miami.  Dwyane Wade won it last week and LeBron the week before.

LeBron led the Heat to a 4-0 record last week, almost averaging a double double with 33.0 points and 9.5 rebounds to go along with 6.3 assists and 2.2 steals.  He recorded a season-high 44 points on Sunday in Portland and a season-high 6 steals on Friday in Milwaukee.  The 33.0 points was the highest average in the NBA.

Here is a recap of LeBron's week courtesy of NBA.com: