Share All sharing options for: LeBron-less Heat abused by Nuggets

The big story before this game was that LeBron James was going to sit out and nurse his ankle injury with James Jones starting in his place. It was nice to see him hit an early trey but he had to come out early after picking up a couple early fouls. Mike Miller was the first shooting guard off the bench for Miami, but he still has yet to shake his phobia of shooting the ball.

After a 1st quarter in which it seemed both teams were feeling each other out, the Nuggets led by 3. They committed no turnovers in the first 12 minutes while the Heat gave the ball away 4 times. Still, not bad for a team that played the night before and didn't get to sleep until around 5am, but it was still early.

I wasn't surprised to see Eddie House come in the game during the 2nd quarter and get the minutes that usually went to Mike Miller, though I was curious to see how much House would get used. That whole ‘playing the night before' thing I just mentioned reared its ugly head as the 2nd quarter wore on.

The Heat was down by 6 halfway through the 2nd quarter when Denver began to pull away. They outscored the Heat 21-10 over the last 6 minutes of the half and took a 17-point lead into the break. The Nuggets bench had more points (34) then the Heat starters (31), most of which came from D-Wade and Chris Bosh who had 12 apiece.

Denver came out in the 2nd half assisting on their first 9 buckets, expanding their lead to 27 in a little over 7 minutes. While watching the game I had an interesting point brought up to me...that on top of the back-to-back and the overnight travel, the elevation and thin air in Denver may have also contributed to the Heat looking so winded.

With the game so far out of reach for such a long period of time, there wasn't much to talk about Heat-wise in the 2nd half. Mile Miller got more minutes in this game (31) then he had all season, yet he only took 1 shot from downtown. He finished 2-for-7 and seems to be shaking off whatever rust is left from missing 29 games with a thumb injury, but he needs to start taking more 3-pointers. After taking 4 during his first game back on December 20th, he has since put up just 3 shots from downtown, including tonight.

Not going to get into a whole lot more about this one. Just gonna put it in the loss column and move on. Chicago is next up on Saturday. Here is an interesting graph about the Heat's most expensive remaining road games. While the novelty of the big three may have worn off a bit, the Heat is still a huge draw, now mainly because of the great basketball they've been playing. 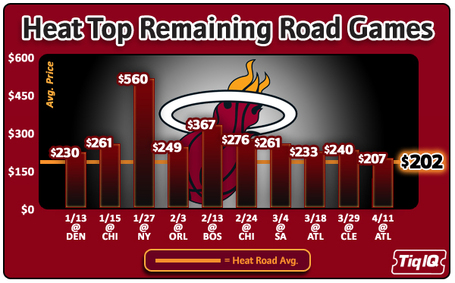