After a season-long 5 day layoff, the Miami Heat finally get back to action tonight when they head to New York to face the Knicks.  Despite not playing in a while, there has been a lot going on with the Heat but unfortunately it all surrounds our players and their ailments.  The biggest thing is Chris Bosh's sprained left ankle keeping him from practicing.  He will more then likely sit out the next 4 games, as they will come in the next five nights.

With Bosh out, the Heat are expected to go with a smaller lineup that features LeBron James at power forward and a continuing expanded role for Mike Miller.  Lebron enjoys playing down low, utilizing his post up game a little more and being able to come off of screen and rolls.  It's good that the Heat is able to work with these lineups because they are going to come in handy when the postseason rolls around.

Beyond Bosh there is Dwyane Wade, who had to sit out Miami's last game because of migraine headaches.  He was able to return to practice this week but had to wear shaded glasses because he is still sensitive to light.  He wore the glasses for the first half of Wednesday's practice and reported no ill effects after he took them off.  Thankfully the pain from Saturday's migraine is gone and the only question is if he'll have to continue wearing the shades while playing.

Wade has suffered from these severe headaches most of his life and is somewhat used to dealing with the symptoms.  He says that he still can't really look up and is squinting a lot.  Apparently the effects usually last around four days, and today is day four.  Regardless of his eye sensitivity, Dwyane is expected to play tonight.  It's just a matter of whether he'll have to be wearing the shaded eyewear or not.

Tipoff from the Garden is set for 8pm.  The game will be nationally broadcast on TNT, so all you non-local Heat fans can rejoice and enjoy seeing them on TV.  Those of you actually in New York and thinking about going to the game, there are still some good options, and TiqIq has tracked them down.  Also, check out the image below to see how much the average ticket price for the Heat visiting the Knicks has gone down. 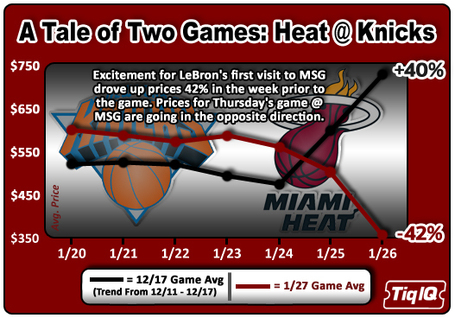