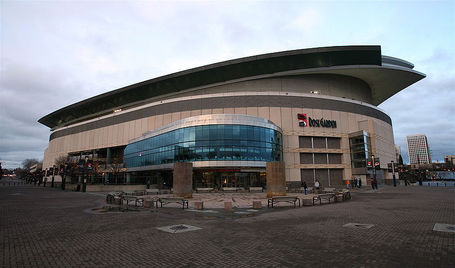 Throughout the season we have seen the Miami Heat look different in about every way imaginable.  From amazingly good to dreadfully poor, dominating some of the best the NBA has to offer but then sometimes looking as though they couldn't buy a bucket or get a defensive stop, regardless of the opponent.  The main positive is that they look good the majority of the time, and they are only going to get better.

Their last game in Milwaukee is a great example of how things can go from looking great to terrible in the blink of an eye.  I give the Heat plenty of credit though; they came back from a really bad stretch and did what they needed to do in order to get the win.  You hear it all the time, but that is what good teams do.  They find ways to win games when they are in the balance.

I only hope that whatever it was that went wrong in Milwaukee on Friday night is something that the team can recognize and improve on.  They have four games left on this road trip and it isn't going to get any easier.  Far from it, actually.  Three of those four games, including tonight in Portland, are against some of the best home teams in the league.

Miami's road winning streak goes all the way back to December 2nd in Cleveland and has taken them through Utah, New York and Los Angeles.  Miami has had to deal with some very hostile environments, a chorus of boo's, back-to-back's...you name it.  Even still, of the 12 straight wins, none of the teams the Heat has beaten are as good at home as the Portland Trail Blazers.

Only Boston and San Antonio have better home records then Portland (12-3), Denver (15-3) and Chicago (16-3).  Needless to say, this road trip is going to be a great test for our Heat, just the kind that many of us have been hoping to see.  I know that Miami can beat up on most teams in the league, but I want to see what they can do against the best possible opponents, while facing adversity, on the road.

Both teams come in playing very well of late.  As we all know, the Heat have won 20 of their last 21 games and 12 straight on the road.  Portland meanwhile isn't getting any attention out West thought they have certainly been playing well enough to deserve it.  They have won 8 of their last 11 games including the last three in a row, all on the road.  At home they've racked up 8 straight wins...so one way or another, somebody's streak is going to end tonight.

Tipoff from the Rose Garden is set for 9pm.  Lets go Heat!!