Share All sharing options for: Wade Shows Candor During Lockout 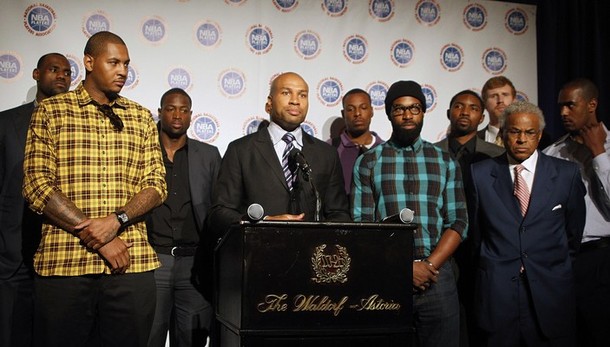 Wade spoke with Wojnarowski Sept. 28, and the story was published the same day as the bargaining session. The Heat’s all-time leading scorer said that if maximum-level contracts did not restrain owners, he and other superstars could receive $50 million-per-year offers. Wojnarowski clearly agreed with Wade’s premise, arguing that the NBA overpays role players and underpays stars. ESPN’s Tom Haberstoh echoed the sentiment in a post, using Wins Above Replacement Player as a metric measuring one’s ability to win games in comparison to a bench player. For example, Travis Outlaw had 0.9 WARP during 2009-10; the New Jersey Nets paid him a $7 million salary this year, meaning the Nets paid $7.8 million per win. Wade’s price tag? $0.9 million per win. LeBron James’ cost? $0.7 million.

Wade, James and Udonis Haslem attended the bargaining session Sept. 30 in addition to the team representative – James Jones, who is the union treasurer. Wade reportedly raised his voice at Stern, who reacted when the commissioner pointed his finger at him. The 2006 NBA Finals MVP referred to Stern by his first name and felt that the commission talked to him like he was his child.

During the bargaining session Oct. 1, Baron Davis said that the exchange was blown out of proportion. Wade did not attend that session because he played in the Chris Paul Benefit Basketball Game at Winston-Salem State University Saturday. The two sides made little progress, virtually ensuring the cancellation of the rest of the preseason and the start of the regular season.