When Dwyane Wade joined the Miami Heat in 2003, some observers saw the potential for a young, athletic duo in Wade and second-year player Caron Butler. Butler was traded the subsequent offseason in the Shaquille O’Neal acquisition, but Heat fans got to see Wade team up with LeBron James last year, rekindling memories of the athleticism Wade and Butler brought to Miami during the memorable 2003-04 season.

Now could the 2011 NBA champion leave the Dallas Mavericks and take his talents to South Beach? Apparently, it is something he is considering. 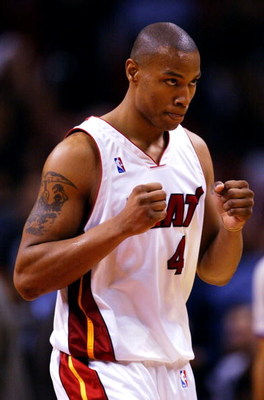 After playing in the South Florida All-Star Classic Friday, the unrestricted free agent said that playing in Miami would be "interesting" and that the Heat are on his list. Butler was quick to note that he still remains loyal to Dallas and that he needs to see how the new collective-bargaining agreement is structured, however.

The two-time NBA All-Star suffered a season-ending injury in January, missing all of the playoffs and Finals. He made $10.56 million last season, but it’s unclear how much he’d command once the lockout ends; he went scoreless in 12 minutes during the charity game. Will the new CBA include the Larry Bird exception, which would give the Mavericks an advantage over other teams in re-signing Butler? Would Butler sign for a mid-level exception contract starting around $3 million?

Looking at the issue from the Heat’s perspective, is it wise to sign a swingman with Wade, James and Mike Miller already under contract? Should Pat Riley use the mid-level exception (if it still exists) on a 6-foot-7 player, not a point guard or a center? This question speaks to the issue of what direction the Heat’s center position should go in. Should the Heat stick to the playoffs strategy of using only one center – Joel Anthony – and utilizing Udonis Haslem and Chris Bosh in the middle? Bosh certainly looked bigger during the game at Florida International University.

It’s premature to speculate on these issues without the owners and players having agreed to a CBA yet. But it would be interesting to see Butler spurn Mark Cuban and the Mavericks for a chance to add to Miami’s speed and athleticism.