Share All sharing options for: More info regarding LeBron James and 'football' 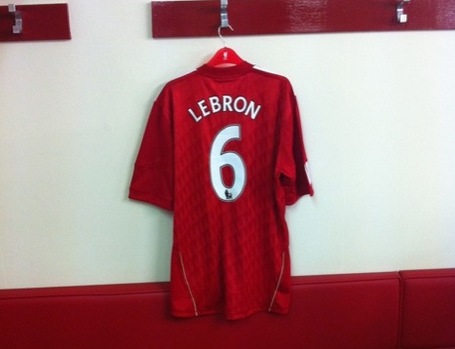 I know that us Heat fans cant get enough LeBron James stories, so I try my best to provide you with whatever I come across.  Our latest LeBron update takes us across the pond to the United Kingdom where James alerted everyone via his Twitter account that he had arrived in Liverpool for a visit.

Just got to Liverpool, England. Riding through the city. What a beautiful place. Home and birthplace of the One and Only "BEATLES."

LeBron has been very actively tweeting about how excited he is to be in Liverpool for a football match between the team he holds a minority share in, the Liverpool Football Club and their Premiere League rival, Manchester United.  Along with the above picture of a personalized #6 LeBron Liverpool jersey that he posted on his Twitter account, he also posted this picture of Anfield Stadium along with the message "I can't wait!! Amazing." 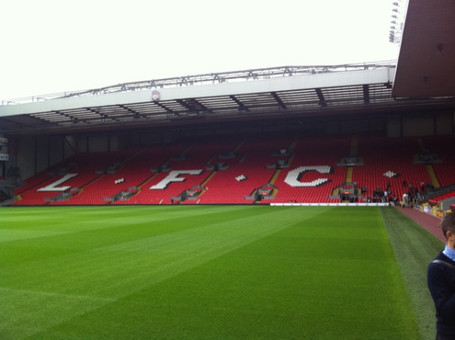 This comes a few days after a very interesting Twitter back and forth between LeBron and Seattle Seahawks head coach Pete Carroll.  They touched on topics such as salary and roster positions, and it ended with Carroll sending James over a picture of a brand new ‘LeBron' Seahawks jersey.  Obviously it's all in a joking manor, but still interesting.  To read it all yourself you can find them on Twitter @KingJames and @PeteCarroll. 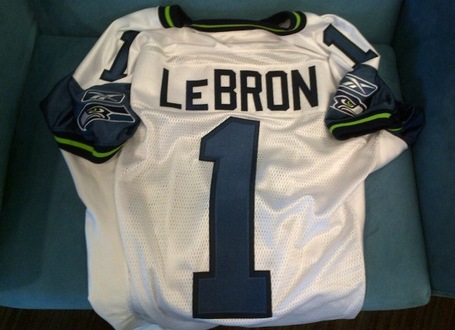 Now, this next part is for anyone who is taking this talk of LeBron playing in the NFL seriously.  I'll start off by saying that there isn't any kind of legitimate change LeBron will be attempting a career change and try to play in the NFL.  I am quite sure of this.  Why?  Well for now lets ignore the obvious reasoning and just look at the facts.

Yes, LeBron James was a standout high school football player...but he stopped playing after his junior year (which ended in 2002).  He hasn't played any kind of organized padded football since then, which would be about 9 years worth of a layoff.  He could be one of the most gifted athletes in the world (which he may be) and still isn't going to just walk on to a football field after almost a decade without playing and be anywhere close to NFL ready.

Then there is the financial risk.  Even though the NBA owners and players union aren't close to striking a deal right now, eventually they will get one done.  Now, for arguments sake, lets just say that LeBron does end up getting offered a contract from an NFL team.  I sincerely doubt that any team out there would be willing to offer him the $79.325 million dollars (which averages out to $19.83 per year) that he is going to make if he plays out his current contract which ends in 2016, and that doesn't include the $16 million that he was/is scheduled to make for the 2011-12 season.

I'm sure its very frustrating to have to sit out and wait while a bunch of guys in suits argue about who is entitled to make more money, especially when some of those guys are trying to take money that the players are entitled to (at least that's what they are arguing about).  Anyway, I seriously doubt that anyone would pass up making that much money to try a football career.

If it was a case where he could get permission to play multiple professional sports, be the next Deion Sanders or Bo Jackson maybe, then we could talk.  But until that happens (which it wont) then there is no chance that LeBron will be pursuing a career playing football.  I wish I could say that we wont have to keep rehashing this, but something tells me that this isn't the last we hear of ‘LeBron and the pigskin'.