Lockout Ruminations: On Dwyane Wade and Difficulties in Objectivity

Share All sharing options for: Lockout Ruminations: On Dwyane Wade and Difficulties in Objectivity 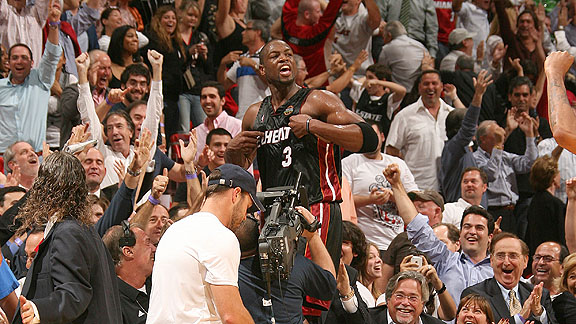 When I started writing for Hot Hot Hoops back in March, I had one goal: to provide objective statistical analysis of the Miami Heat. For the most part, that’s what I’ve stuck to. If you’ve read any of my posts you’ve encountered numerous graphs, tables and charts. I like working with numbers; they’re safe. I choose to look at basketball like a jigsaw puzzle, with different pieces fitting together to make a whole. While basketball will probably never be able to be fully quantified, we have a lot of data that can help make informed observations and decisions. I try to bring those to you, the reader.

The 2010-2011 Miami Heat season was crazy for a lot of different reasons, but mainly it all came down to one man, LeBron James.  Every columnist in every NBA city had an opinion on his decision, his play and essentially his every spoken word.  Much of it was subjective analysis presented in an objective fashion.  LeBron wasn’t clutch, LeBron needed to work on his post game, LeBron had to find a way to be a leader, etc.  You know the drill.  As such, many of my 12,000+ tweets and numerous blog posts centered on the man wearing the bull’s-eye disguised as a “6.”  Over the course of the season I profiled other players on the roster as well.  I tried to explain the Bosh’s perceived dip in production, the ever-changing point guard situation and the state of the Heat bench.  One person I never truly addressed individually was Dwyane Wade.

My lack of focus on Dwyane Wade apparently upset some of my followers.  Over the course of the regular season and postseason I was called a “fake Heat fan” and a “LeBron lover.”  Just yesterday I received this tweet:

In hindsight, maybe I should have focused on Wade more.  But, as I said earlier, I strive for objective analysis, and it’s just not that easy with Wade.  Dwyane Wade is, and forever will be, my favorite basketball player.  To be perfectly honest, it’s really difficult for me to write about the artist formerly known as “Flash” without emotion seeping into my thought process.  In my mind, LeBron James and Chris Bosh are still hired guns.  They came to town after seven seasons in Cleveland and Toronto in search of a championship, and hopefully they’ll get it.  Dwyane?  Well, Dwyane has been “ours” since he came into the league.

I could list my favorite Dwyane Wade memories, but it wouldn’t do anyone any good.  You all know them all.  What I will say is that during the 2008-2009 season, I fell in love with an athlete like I never had before.  Dwyane was just doing “freaky stuff” (coined by Beckley Mason) every night.  After spending half of the season watching games on shaky Internet streams (I was in school at Virginia at the time), I splurged and got NBA League Pass, and have every season since.  The things that Dwyane Wade does on the basketball court mesmerize me.  When I need a basketball fix, I log into the Hot Hot Hoops SynergySports account and watch all of Dwyane Wade’s blocks from this past season in succession.   Or I watch his plays in transition.  Or I watch his pick and roll highlights.  I try to watch other players, but it never works.  It’s always Dwyane.

Over the next week I plan on having a few posts for you on Dwyane Wade.  They will be statistically oriented, and they will address a number of subjects.  They will, however, probably have a twinge of bias.  But that’s just the best a “sorry ass heat fan” can give you.