The ongoing NBA lockout, which threatens to cancel the league’s marquee Christmas Day games and possibly the entire 2011-12 season, will not stop the Miami Heat players from playing against the best competition the world has to offer. 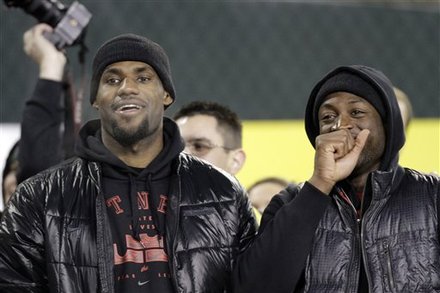 LeBron James and Dwyane Wade – along with Chris Paul and Carmelo Anthony – will host a four-game "Homecoming Tour" next month. The tour will begin with a game in James’ hometown of Akron, Ohio Dec. 1, then move to New Orleans Dec. 4 before traveling to Wade’s hometown of Chicago Dec. 7. The tour ends with a Dec. 10 game in East Rutherford, New Jersey.

All four superstars will play in the four games. The tour will also include community outreach programs in each city, and proceeds from the traveling event will benefit each player’s respective charitable foundation. Google+ will stream each game live.

The four headliners have collaborated with Heat players Chris Bosh and Udonis Haslem to set up a training camp in Oregon for players under the representation of Creative Artists Agency, which contains agents representing all six players. Bosh is also expected to play in all four games. The rest of the rosters are subject to change, as James will help coordinate the Akron game, as will Wade in Chicago, Paul in New Orleans and Anthony in East Rutherford.

"I am really proud of the work we're doing in Akron and know what this tour means for the community,” said James. “The kids in our Wheels for Education program are working so hard and this is a great way to encourage them. I am also excited about going with the guys into their communities, helping their charities, and connecting with fans."

“Everyone knows my foundation work and making a difference in the community is of the utmost importance to me,” said Paul. “But being able to play the game I love alongside my friends LeBron, D. Wade, and Carmelo, as well as raising money for charity, is a win-win situation.”

“It is so important for me to never forget where I came from. Chicago will always hold a special place in my heart and the people there have constantly supported me and shaped me into who I am today,” said Wade. “I am thrilled to have the opportunity for Wade’s World Foundation to continue to give back to this community. I hope this tour inspires others to become more active and make a difference.”

"I am so excited to have this opportunity to participate in this tour. To couple two of the things I love to do - play basketball and give back - is special,” said Anthony. “This is just the beginning of a movement to facilitate change in our communities and I am happy to be a part of a group of guys willing to lead the charge."

All four host players will participate in each charitable community event, including:

All four exhibition games will be streamed live on the official The Google+ Homecoming Tour page, accessible at www.HomecomingTour.com. The page will also feature an array of integrated social media content from Digital Artists Entertainment, a creator of social digital content platforms for top sports and entertainment franchises. Content will include exclusive behind-the-scenes images and videos from each event, as well as opportunities to video chat with the players in Google+ Hangouts. Fans can sign up at Google+ to participate.

The Google+ Homecoming Tour is organized by CAA Sports, a division of Creative Artists Agency, the world’s leading entertainment and sports agency.

ABOUT THE WADE’S WORLD FOUNDATION

The Wade’s World Foundation provides support to community-based organizations that promote education, health and social skills for children in at-risk situations. Dwyane was inspired to start the foundation because he wanted to give back to underserved communities and support issues of purpose. “I can’t just let basketball define who I am and what I am supposed to become,” said Wade. “Like my mother always tells me, ‘[My life] is bigger than basketball.’” Since the foundation launched in 2003, Wade and his family have been committed to giving back in Chicago, South Florida, Milwaukee and throughout the country. Dwyane philanthropy touched many lives and have been recognized throughout the country ie, USA Today, NBA community assist and more. www.wadesworldfoundation.org.

Founded in 2004, the LeBron James Family Foundation empowers children and single-parent households through innovative programming and initiatives, strengthening the ties between family members and building hope through education, physical fitness and better health for those who are dealing with adversity. Among the LJFF’s most important national programs is its partnership with the Boys & Girls Clubs of America. In 2011 the Foundation renovated 13 clubs in 6 cities across the United States. In addition, the LeBron James Family Foundation hosts the Wheels for Education program which provides Akron schoolchildren with the opportunity to achieve long-term academic success as well as maintain their physical fitness. The LJFF also partnered with HP to provide 2,000 computers to the Akron After -School Program and Boys and Girls Club.

ABOUT THE CP3 FOUNDATION

The CP3 Foundation strives to impact the communities it serves by using its resources and passion for philanthropy to enhance and promote education, health, sports and social responsibility for youth and families. In 2005, Chris established the CP3 Foundation, in honor of his late grandfather to provide scholarships for kids to attend Wake Forest University. Chris' emphasis on community involvement has won the CP3 Foundation the NBA's Community Assist Award three times. The foundation's initiatives include partnerships with Feed The Children, Make-A-Wish Foundation, Boys & Girls Club and Habitat for Humanity. The foundation also sponsors and supports literacy initiatives, youth basketball clinics and court refurbishments. In 2010 Chris partnered with Chase Bank to launch the CP3 Afterschool Zone in New Orleans, which continues to emphasize the foundation's commitment to helping rebuild the City of New Orleans by providing an enriching afterschool environment for youth. If you would like to make a contribution to the CP3 Foundation, please email info@cp3foundation.org or click here.

ABOUT THE CARMELO ANTHONY FOUNDATION

Established in 2005, The Carmelo Anthony Foundation is the vehicle by which Carmelo gives back to the community through a variety of outreach programs and donations. The mission of this nonprofit organization is to positively impact the lives of those living in under-served communities through three key focus areas – education, recreation & community outreach. The foundation’s most notable programs include but are not limited to the Back to School give away, Courts 4 Kids - a basketball refurbishing project, H.O.O.D. (Holding Our Own Destiny) Movement 3 on 3 Tournament, A Very Melo Christmas and A Very Melo Allstar Brunch. More information on the Carmelo Anthony Foundation can be found at www.carmelocares.org.