To Amnesty or Not To Amnesty, That Is The Question

Share All sharing options for: To Amnesty or Not To Amnesty, That Is The Question 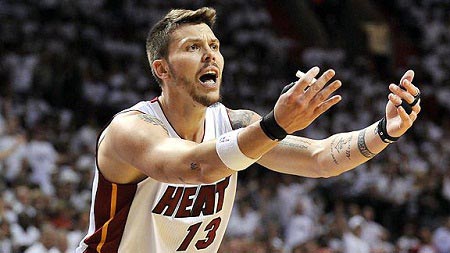 Nearly every major media outlet this week has had a feature on the Miami Heat and their Mike Miller "situation." Prior to last season Mike Miller signed a five-year deal worth about $29 million. The deal was considered a bargain at the time. Miller turned down larger offers from the Denver Nuggets and Los Angeles Lakers to play with his former Team USA buddy, LeBron James.

In the amount of time it takes to watch this video, Miller’s season crumbled. His shooting hand was caught in Dwyane Wade’s jersey, severely injuring his right thumb. Miller returned in December, but he wasn’t the same player. Repeated blows to the head left him concussed, collisions damaged his shoulders, and for good measure his left thumb decided to copy his right and tear some ligaments. The Heat was left with a player in a full body compression sleeve and a pulley system for hands. Not what they had envisioned back in July. However, despite all of this, Miller somewhat proved his worth in the postseason. His rebounding in the Chicago series was crucial in the Heat advancing. Also, his Game 4 will never be forgotten by one Heat blogger, me, because of what he was going through with his daughter.

As is the case with many players, the idea of Mike Miller is quite possibly better than the actual Mike Miller.  With an offseason to recover from his injuries, it would not shock anyone if Miller had a great season alongside the Larger Than Average Three.  But there’s no way to be certain, so the Heat are left with the difficult decision of paying him to just disappear.  The two options can, and will, lead the Heat down very different paths.

When the “tentative” agreement was first reached, it appeared that the Heat would have ability to use the full mid-level exception worth $20 million over four years.  This was a result of the $4 million apron that allowed non-taxpaying teams to take a dip into the luxury tax.  With Micky Arison’s wealth, and the win now philosophy, the money wouldn’t have been an issue.  Of course, things are never as simple as they appear, and Brian Windhost of ESPN’s Miami Heat Index promptly showed everyone just that.  Keeping Mike Miller and using the full mid-level exception would result in a hard cap for the Heat at $74.3 million, a totally unfeasible scenario.

Keeping Mike Miller would mean not using the full mid-level exception.  The Heat could still use the biannual exception or the mini mid-level, but those would prevent them from making any kind of free agency flash.  This scenario isn’t much different from last season.  The Heat would fill out the roster with low-priced veterans looking for a ring.  The lack of a true center would be bemoaned all over, but I’ll get to that later.

Amnestying Mike Miller would not get the Heat under the salary cap, which seems to be a common misconception amongst Heat fans.  Discarding of Miller’s contract would still leave the Heat in between the cap and the luxury tax line, but it would eliminate the pesky $74.3 million hard cap.  The move would allow the Heat to use the full mid-level exception and continue to add players who accept the veteran’s minimum.

If the Heat want to make a serious upgrade at the center position, this is the way to do it.  Pat Riley will certainly make calls to Tyson Chandler and Nene, two of the premier free agents.  Realistically though, the Heat have no chance.  Having either of those players accept $20 million when they could make upwards of $50 million is a very difficult scenario to envision.  That doesn’t mean they wouldn’t accept the offer, but don’t hold your breath.

The much more reasonable option is Samuel Dalembert of the Sacramento Kings.  Dalembert would be taking a hefty pay cut as well, but not nearly at the level of the others.  The proximity of Miami to his native Haiti, and the Heat’s already large charitable work in the nation, may be enough to entice Dalembert who lives in Boca Raton.  Dalembert is not a “great” center, but he is vastly better than Joel Anthony.  Dalembert rebounds at twice the rate of Anthony and has functioning hands.

Moving forward with Dalembert (or if you’re eternally optimistic, Nene) and not Miller, the Heat will have to sign multiple veterans to fill Miller’s role.  Last season Miller split time fairly evenly between shooting guard and small forward.  James Jones, who’s a free agent, is an obvious candidate.  While his ceiling isn’t as high as Miller’s, there were periods last season where Jones was clearly the superior player.  Aside from Jones, the Heat could look at the various wings who will be available such as Shane Battier, Grant Hill, Caron Butler, Tracy McGrady and even Vince Carter.  Whether or not those players would settle for the minimum is up for debate, but chances are at least one would come to Miami.

Amnestying Mike Miller would fill the hole at center, and would still allow the Heat to sign veterans to fill the various sharp shooter/defensive stopper roles.  The roster would be more traditional, and maybe better.  The wing options don’t have the same capabilities of Mike Miller, but the improvement at center would conceivably offset any downgrade of the swing positions.

So What To Do

It’s a very difficult decision, one that could very easily go either way.  But, I tend to side with Rob Mahoney, who writes for every site on the internet.  One of the Heat’s most distinguishing features last season was the amorphous nature of its lineups.  If you’re reading this, you’re probably familiar with the blogosphere’s obsession with the positional revolution.  It’s basically a blending of traditional positions.  Having no defined point guard, shooting guard, etc.  It’s a theory I heartedly endorse.

Nearly every player on the Heat roster that got significant minutes during the Heat’s playoff run was able to play multiple positions.  It has been my opinion that the optimal Heat lineup featured the LTAT, with the two open spots designated by matchup.  We saw this take shape when Erik Spoelstra finally tired of Big Z’s matador act.  Against the Bulls, when the Heat finally had a full complement of players, Spo used three different closing lineups in the series’ final three games.  The two spots along side the LTAT were filled one night by Miller and Haslem, then Chalmers and Haslem, then finally Bibby and Anthony.  Three different game situations dictated three different lineups.

The Heat play a different brand of basketball than any other team, particularly offensively.  As I’ve covered before, it’s not always pretty, but the offense is highly effective; even with Joel Anthony on the floor, which is its own accomplishment.  Defensively, the Heat rely on speed and the ability to rotate and recover.  They employ two freaks on the perimeter in Wade and James, and have Bosh, Anthony and Haslem clean up on the back end.  Mobility/speed is a must on the Heat backline, something Dalembert doesn’t really have.  The Heat got by with Dampier and Ilgauskas last season, but at their peak were built on a high-speed attack.

When last year’s Heat team was assembled, the dream was a finishing five of Wade, Miller, James, Haslem and Bosh.  As I said earlier, I’m flexible when it comes to lineups, but the frontcourt makes sense.  Haslem and Bosh both provide the Heat with pick-and-pop options and can space the floor with their mid-range jumpers.  As the clock winds down, space is at a premium.  It is my concern that a more traditional center may hurt the Heat more than it helps.  If that’s the cost, is it worth having one?  The Heat already play the best rim defense in the league, and have the third best rebounding rate.  That doesn’t indicate a “hole” in the middle at all, does it?

In a perfect world, the Heat would have a center who rebounded, played defense and was able to finish easy baskets at the rim.  But it’s the opportunity cost of acquiring one that must be taken into account.  Losing the team’s best floor spacer, who also happens to be the pivot of the Heat’s versatility and rebounds effectively, may not be worth it.  It’s a difficult choice, and one that I’m glad I don’t have to make.

If Mike Miller is healthy, which is always a big if, the decision comes down to the desire to be more traditional or continuing down the path of amporhousness (I made that word up).  I’d lean towards the latter, believing that it leads to more options come playoff time.