Share All sharing options for: Mike Miller Puts House Up For Sale 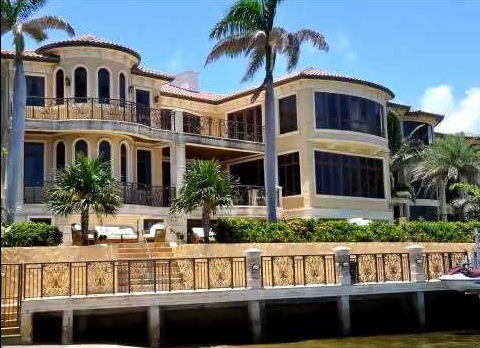 Maybe he's moving closer to LeBron's pad or he's downgrading to an oceanside condo now that paychecks aren't coming in anymore. Or maybe Ira is on to something and Miller is playing it safe should he be on the move yet again. As has been widely reported, the new amnesty clause may include the option that teams can use it once throughout the course of the new collective bargaining agreement, as opposed to the last time teams were allowed to utilize a similar clause but had to shed one contract from their squad immediately.

UPDATE: Here's a link to more pictures of the house. Miller is asking $8.9 million for the six-bedroom, nine-bathroom property. He purchased it for $5.4 million last year after signing with the Heat. (Wait, NINE bathrooms?)

Set on a lot of more than a quarter-of-an acre, Miller’s waterfront property features views of the Atlantic Ocean. A private boat dock offers access to Hillsboro Bay, while the outdoor pool connects to a marble-laden wet bar.

The interior of Miller’s 9,968-square-foot pad features cathedral-style ceilings and marble running throughout the home, and includes a large den, media room and butlers quarters. The spacious master suite offers not one, but two master baths, highlighted by a raised Roman bathtub.