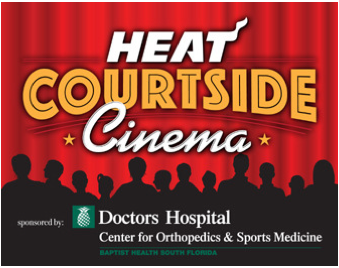 Can't wait another day to see some NBA basketball tip off? Well, you're just going to have be a bit more patient...but in the meantime, head down to the AAA next week for a special event. Check out the details below and how to score free tickets...

MIAMI – The Miami HEAT announced today that it will host HEAT Courtside Cinema at AmericanAirlines Arena on Saturday, December 17 at 6:00 p.m. during which it will debut Into the Fire—a full-length docudrama that provides an in-depth look at the historic 2010-11 season. While the HEAT Courtside Cinema event is free and open to the public, all attendees must obtain a ticket for admittance. The link to register for free tickets will only be available online at Facebook.com/MiamiHEAT. Fans must "like" the Miami HEAT on Facebook in order to register for free tickets. Access to the Arena property and the event will be available exclusively to those who have completed the online registration process and have printed their free tickets. Additionally, there is a four-ticket maximum per person. Parking will be available in the Arena's P2 parking garage for $5.00 per car and will be available on a first-come, first-served basis. Select concession stands as well as the Miami Hoops Gear store will be open for business. HEAT Courtside Cinema at AmericanAirlines Arena is presented by Doctors Hospital Center for Orthopedics and Sports Medicine.


Into the Fire provides a comprehensive look at the 2010-11 season beginning on July 9, 2010 with the historic signing of the year's top three free agents: Dwyane Wade, LeBron James and Chris Bosh. Narrated by HEAT Legend Alonzo Mourning, the film gives the audience an insider's look at the team from the opening of training camp to the highs and lows of the grueling regular season to the epic rematch between the HEAT and the Dallas Mavericks during the 2011 NBA Finals. It showcases spectacular highlights, player post-game reactions and commentary from Wade, Bosh, Udonis Haslem, Head Coach Erik Spoelstra and Team President Pat Riley. The story is told through a collage of local and national media clips and interviews conducted with writers who regularly cover the team.

Much of the footage was culled from HEATV, the team's in-house, Emmy Award-winning production department putting the viewers behind the scenes, on the bench and inside the HEAT locker room with unprecedented access. Footage was also provided by Sun Sports, TNT Sports, ABC Sports, ESPN and NBA Entertainment.

Into the Fire was conceived by Ed Filomia the team's Senior Director of Media Production and created by HEATV in association with NBA Entertainment.