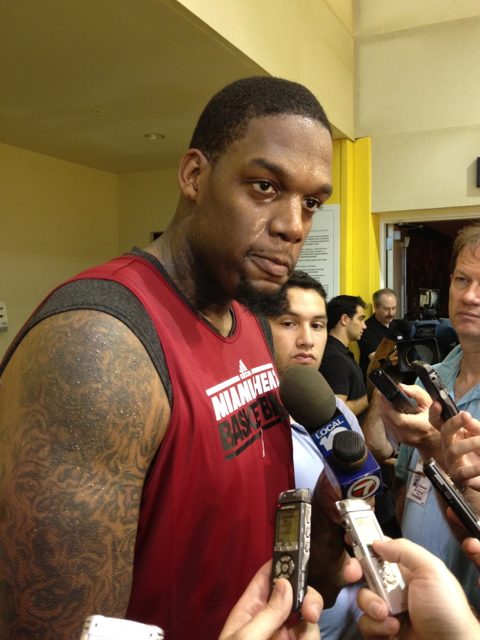 Eddy Curry had a simple response as to why he's back in the NBA and with the Miami Heat after three years away from the type of career just about anyone would dream of having.

Hmmm. Well, that's fair. The league certainly has a dearth of big men who have a post up move or two in their arsenal. But Eddy Curry?

"Coach Riley reached out, and it was between him and 'Bron and D Wade - I've known those guys for a long time. I know that this is a great place for me, both to rejuvinate myself and I feel like I can help here.

"I feel good," Curry continued. "Obviously, these guys are on a whole other level here so I got some work to do but I'm willing to do it. I'm a lot closer than what I thought I would be. I feel good and I'm going to give it my all. I'm going to try to help these guys win some games."

Asked whether that means he could eventually see himself playing starter's minutes, Curry remained optimistic without losing sight of the reality of how much more is left to be done on a comeback that's officially just hours in the making since signing his new contract.

"I've been playing against pros all summer. Obviously this is a Heat camp so it's a lot different but I've been playing all summer. I'm a basketball player before anything so that comes second nature. I have to start all over anyway. No if's. Nobody is going to do something based on what happened the last couple of years so I got to start over fresh and to me this is a good situation."

His close friendship with two major components of the Big 3 didn't hurt his chances of getting the tryout, at the veteran's minimum. For a team that has never stopped preaching defense since Pat Riley arrived to Miami in 1995, it's a curious union and it's likely his friends helped sway their boss into giving him a shot.

"That (was) huge. I knew LeBron since he was maybe a sophomore in high school. I've known him for quite some time. Wade grew up a few miles away from me, same AAU team - that kind of thing. So it helps to have these types of friends but at the same time, coach Riley saw something he liked in me and it's a great situation for me.

"I can do it," he responded as to whether he can play both sides of the court. "I was asked to score so that's what I did. If I'm asked to rebound I'm going to go ahead and give my all and try to rebound and defend. I'm happy, I believe (Riley) is happy. I'm healthy and I think the key is just to remain healthy and keep pushing every single day doing extra work and being able to put myself in a position to help these guys out."

LeBron was happy to him aboard and add another close friend to the team alongside Wade and Mike Miller.

"First of all, he's humble and he's blessed to have this opportunity again. For us as teammates we're going to stress the fact that he has no pressure at all. We're happy to have him here and we want him to love the game of basketball like he did once before. You can see his smile, you can see his passion. We're excited as a team but we're more excited for him. He's given himself a chance and the organization has given him a chance to be a basketball player again."

Curry claims he's lost 70 pounds and I believe him but he still needs to lose more, ideally at least 20 pounds. Then again, he'll definitely lose more after he gets through training camp and two preseason games. Curry claimed he doesn't remember how much he weighed at his heaviest but was happy to detail how he lost all that weight.

"I got into the gym and I started to re-commit myself, refocus myself and try to be ready for whatever came next. (My diet) was nothing special, I just kind of watched what I ate, not eating late, making sure I got to the gym and get a lot of cardio. I did a lot of extra running, just trying to stay healthy and fit. 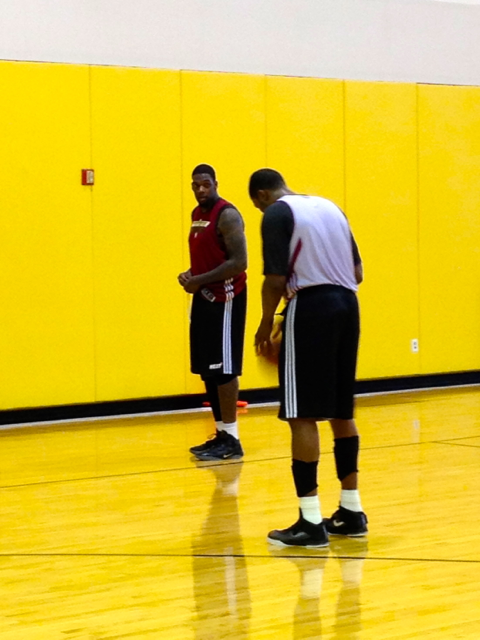 "It was frustrating not to play the game you love. But I'm getting an opportunity now to be able to do it again so that's all I can really focus on. It's easy to look back and say, 'Man, I wish this wouldn't have happened or I wish this would have happened in a different way.' But I can't do that. I'm here in this situation now. We got two practices tomorrow so I just have to go home and get some rest and be ready to go."

Obviously, whether or not this is a new and improved Curry won't truly be known until he's out on the court against NBA competition and trying to keep up with the Big 3. If he can get back on defense and provide six fouls on an as needed basis, it's just about adequate as a replacement for Jamaal Magloire. But the Heat need to improve on their center position, not just tread water. With the best centers on the market rapidly priced out of the Heat's reach, Riley is taking a low-risk gamble that his training and coaching staffs can pull off a successful reclamation project along the lines of Isaac Austin or Anthony Mason.

Even still, there may not be room for both Curry and fellow big man Dexter Pittman on the roster, or enough patience to groom both. If he's slow on offense, his presence alone will clog up the lanes for his two good friends as they try to slash to the basket. Just about everyone is accustomed to using him as the butt of jokes as there's simply no way of talking about him without bringing up his past and all that baggage. Curry understands this and seems to be at peace with it.

"I have more faith in myself than anybody. I feel no obstacle is too high to overcome. I've been through a lot and I feel like brighter days are ahead and this is the first step. I never gave up hope. I knew this opportunity was here. It was just a matter of time for me.

"I don't even think about (the criticism). I'm thinking about right now in this situation and what I have to do to help."