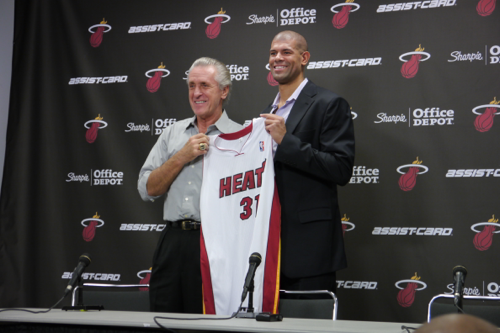 Miami Heat president Pat Riley proudly introduced his latest free agent bargain, Shane Battier to the media Saturday afternoon immediately after the second day of training camp wrapped up. It was a lot of firsts for the ten-year veteran. First time he was an unrestricted free agent. First opportunity to play for a bonafide championship contender and not just a playoff team.

"The Arison family are wonderful people," he said. "It's a family I have tremendous amount of admiration and respect for, I've known them for a long time. Nick has been a friend and I've always respected what Nick has done personally and professionally. When you have a chance to do something special, it's always better and feels more special when you get to do it with people you enjoy and respect in life.

"That opportunity to go on this journey with Nick Arison, that's rare. He's my boss now which is cool, I respect the bounds of the professional ranks here," Battier said with a smile. "But I'll never let him forget that he used to wash my sweaty tights."

Armed with precious little in the form of exemptions with the team well over the cap and apparently unwilling to let go of the perpetually injured Mike Miller with the one-time amnesty cut, Riley went ahead and nabbed another versatile 6'-8" swingman that can act as a swiss army knife of sorts - able to work in conjunction with the Big 3, knock down the open jumper and also provide a much needed defensive spark off the bench. Though the center and point guard position were more pressing needs, Riley had Battier in his targets with a strong feeling he would be amenable to a discount for his services in exchange for an opportunity like no other team could offer him.

"When the bell ring, so to speak, and we had the opportunity to start the free agent process there was a couple of first calls we made," Riley explained. "Obviously there were two of our free agents but the very first call that we made to try to encourage a player to come here was to Shane. The day that we did that we were sort of relentless in our efforts.

"We're very happy. He brings such a huge element to what it is what we're trying to do as a franchise. I think he fits into the culture, obviously he's a hard worker. One of the best defensive players in the NBA individually in two or three positions. He's a basketball player that knows how to win and I think he's going to be a great addition to this team." 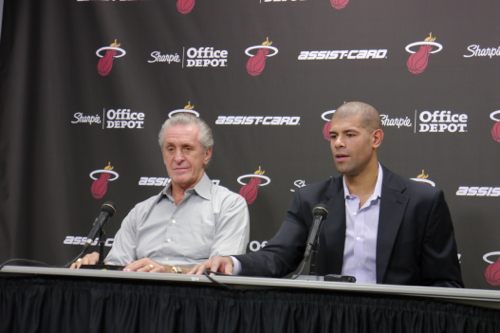 The gambit worked and the Heat quickly had their man. Fortunately for the team, Battier was already of the mindset at the start of free agency that he was willing to make sacrifices in order to be on a successful franchise.

"The lockout was positive in the respect that it gave me time to really reflect on what's important at this point of my life. For me it always came back to the same thing: I want to have a winning role. When the opportunities were laid out before me, it was crystal clear that the Miami Heat gave me the best opportunity to have a winning role ten years into my career. I couldn't be happier. I was sitting there with my wife, Heidi, looking at all of our options and we just kept shaking our heads and saying, 'What's wrong with this scenario?' Whenever another team would give us an offer, we said to each other, 'Does this beat Miami?' Hands down, every time, it was no. I'm really thrilled for the opportunity to be something special."

Whether that means big minutes or not is another story, but the veteran doesn't seem to be bothered about that right now with the priority right now of getting acclimated to the third pro team of his career.

"I've approached basketball the same since day one, I just want to do my job and do whatever it takes to win," Battier stated. "So I can't tell you right now what I'm going to do but I know that every team I've played on since high school or college, I've done what it's taken to help the team that I'm on become better. If that involving waving a towel, you know what? I'll be the best darn towel waver in the league. If it means going out there and playing tough defense, I'm going to do that to the best of my abilities.

"So, the beauty of our team is that we're very versatile and I pride myself in being a versatile player. I'm excited to see how I'm going to fit in on this team and help this team achieve the ultimate goal.