Pat Riley did not schedule a press conference the last day teams could use the amnesty clause before pocketing it until next year to waive Mike Miller. But he did make a significant announcement – Erik Spoelstra has signed an extension with the Miami Heat. The 2010-11 year was the final season on his contract. 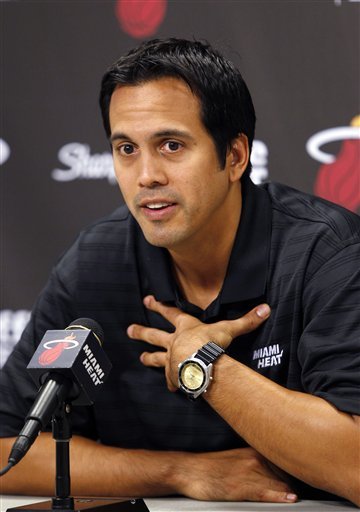 Just a week ago, Spoelstra said that his contract situation would not distract his team this year. It seemed as if the coach going into his fourth season was resigned to the prospect of essentially having a make-or-break year. But Riley undoubtedly made the right call, providing Spoelstra with well-deserved job security and mostly relieving his team of a distraction.

In today’s sporting world, the coach is subject to all the scorn when his or her team doesn’t play well, but receives no credit when the team succeeds. This perception is wrong and senseless, but it’s unfortunately the sentiment many fans share. Spoelstra certainly made his mistakes – he continually started Mike Bibby in the Finals after Rick Carlisle moved J.J. Barea to the starting lineup and Mario Chalmers emerged as the clearly better player. Chalmers finally received the starting job in Game 6, but that didn’t really matter because Dwyane Wade and LeBron James did not play well in that game. Even so, one must ask the question why is it Spoelstra’s fault that the Heat’s two best players had sub-par games?

The hard-working Spoelstra proved his skills as a coach last year. He focused exclusively on defense early in the season, providing a nice foundation that enabled Miami to build a good record even with a shaky offense. Over the course of the season, he added new wrinkles to the Heat attack. James began setting screens for Wade, making for easy opportunities at the basket. In the final minute of Game 3 of the NBA Finals, James set a screen for Wade before receiving the ball and kicking it out to a wide-open Chris Bosh for the game-winning bucket.

Just in seeing the team’s Red vs. White scrimmage, Spoelstra has already added new facets to the Heat offense, making the team more difficult to defend. Before the lockout, Spoelstra told Bosh to work on extending his range, and the 6-foot-11 power forward made a couple of 3s in transition in last night’s scrimmage. Some may feel leery of having Bosh shoot 3s when he will play more center this year, but when Wade or James runs in transition to the basket, having Bosh open at the 3-point line while the defense tries to clog the paint can be a lethal weapon.

The extension won’t wide out all of the speculation; the Heat had controversies with the suffix "-gate" last year, so the media will always be neurotic. The guesses about Riley will still continue, but it won’t stand nearly at the level it was last year. The playoffs and Finals will serve as the proving ground for Spoelstra and the rest of the Miami Heat, though. Until he wins a championship, Spoelstra will always have the cloud of Riley hanging over him, even if it is just an invention of the media. But the young coach has earned a couple more chances to guide the Heat to a title.