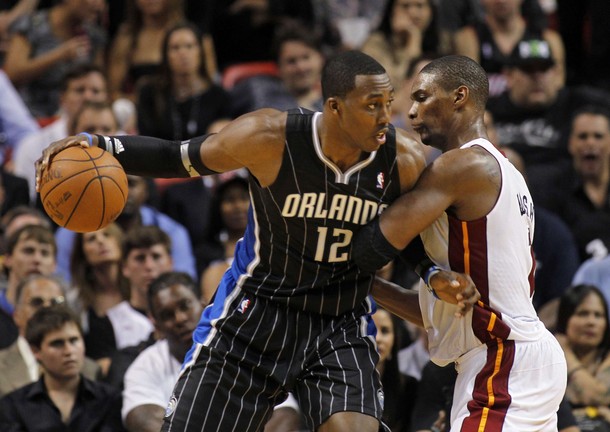 The Miami Heat begin the second season with the Heatles somewhat under the radar, where they are arguably the second biggest NBA storyline in the state of Florida, with Dwight Howard and his ongoing "should I stay or should I go?" saga continuing with the Orlando Magic. Needless to say, the All-Star center has not been happy with the disappointing results his team has had the past few years in the postseason following successful regular season campaigns. There's also the question of what his relationship with coach Stan Van Gundy and general manager Otis Smith is at the present time after taking his trade demands publicly and the team stricking out wildly in past season with big trades that brought in the likes of players such as Gilbert Arenas but largely did nothing but hurt roster continuity.

In contrast, the Heat's roster largely remains intact from last season with the arrival of Shane Battier and Eddy Curry being the most notable, though both are unlikely to play tonight due to injury in the first of a home-and-home set with their state rivals. More intriguing though will be the matchup between rookie Norris Cole and Magic point guard Jameer Nelson. Needless to say, the Heat have had trouble keeping up with speedy point guards in the past (and no, Jason Williams was never a defensive stopper) so there is hope that Cole may have some potential in this category.

Expect starters for both teams to play some decent minutes, but with the start of the regular season a week away don't expect a highly competitive contest. Most players will still have considerable rust and the coaching staff on both teams haven't had time to properly condition their teams for a regular NBA season thanks to the lockout and the rush through training camp and free agency.

Useless trivia: According to the Orlando Sentinel, the Magic have won 21 consecutive preseason games with the last loss on Oct. 6, 2008 against the Atlanta Hawks.

When & Where: AmericanAirlines Arena, 6:00 PM